the white elephant in the room 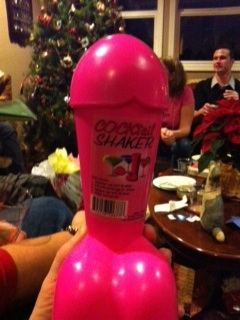 The parties, oh the parties. December is not even at the halfway mark, and my rum ball limit for the month has been far exceeded. I fear I may have to go on that dreaded cleanse again in January. But until then, I'm having a whopping good time.

I'm up to party number five. This weekend was especially festivusish, beginning on Friday with my husband's staff party. He's a teacher at one of those focus group schools that attract outside-the-box types. Turns out, the school also attracts a rowdy, fun bunch who believe in the sanctity of the happy hour and throwing white elephant parties.

Oh the range of human behaviors and Myers-Briggs typing opportunities at one of those soires! There's the "we have to get the best gift at all costs" type--those are often couples who team up to win the one item that someone might actually pay money for.

Hoarders tend to bring six or seven different items so they might acquire that many in return.

The conflict avoiding, codependent folk who attend these gatherings will often bring useful items because they can't bear to disappoint anyone, and they hope to pick the least desirable item to avoid being part of the "seizing" aspect.

Lazy slobs just grab the first thing they spy in a corner of their garage and stuff it into a grocery bag, and often leave the party without their acquired prize.

Of course, I fall into another category. Life has bestowed many graces upon me, and along with those have come the spoils (or, extrys as they're sometimes called). If I attended a white elephant party every weekend of the year, I would still have plenty of ornate candy dishes, religious paint-by-number sets, and macrame plant hangers in my basement. I'm proud to say, the gift I wrapped up was one so vile, its "winner" made a spectacle of herself, practically bursting into tears with hope that someone would steal it. (I can't tell you what it was, because. alas, it was an actual gift, a vastly unmathomable gift, and was most likely dumped into the maw of a Goodwill bin on its new owner's way home from the party).

It's fitting then, that I would end up with the plastic pink penis cocktail shaker and the half bottle of crappy vodka, right?

What about you? Been to any white elephant parties yet?
Posted by Suzy Vitello at 6:25 PM