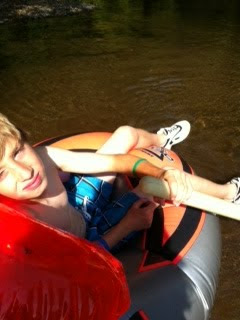 Another season of frivolity just about over. The gravitas of September looms. As does the throat virus I always get this time of year, but that's another story.

I have a love/hate thing with September that I know a lot of people can relate to. September heralds the spirit of "new" much more than, say, January. Along with the formal construct (read: first day of school), the earth jolts rather abruptly towards autumn as Labor Day approaches.

Gone are the 10 pm dusks, the blazing hot blue-sky mornings, the yearning for air-conditioned matinees. 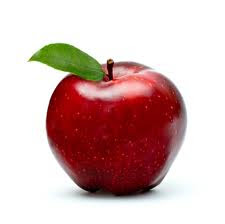 The alarm goes off at five-something and my husband returns to the classroom, his head bowed in resignation. My son wipes the disappointment from his eyes upon waking, crams half-done homework into his backpack and slinks off into the gloaming.

And as for me, my kingdom restored, I have to admit, I get out the Pepsi.

As much as I love having my family nestled be-next to me, I celebrate the perennial season of hermitic return. Hours of uninterrupted silence (but for the two or three conference calls that worm their way into my day). The potential for deep engagement at the top of each blessed hour. The freedom to pop out for a walk up the hill to compost some thoughts. The array of projects from which to choose without the imposition of lawn watering.

But, somewhere between two and three in the afternoon, so absorbed in my disparate voices, and failed sentences, I have to admit: I crack. This is when I start biting off my arm and it usually takes the form of jumping back into the world with some ridiculous grand gesture. Perhaps a five course meal for which I must fetch ingredients! A trip to the paint store for living room makeover inspiration! Online bulb catalogs! A new workout regime!

September. A new year: new resolutions. The digging, the diving, the hope. What does September mean to you?
Posted by Suzy Vitello at 8:56 AM 1 comment:

Email ThisBlogThis!Share to TwitterShare to FacebookShare to Pinterest
Labels: back to school, end of summer

the country mouse and the town mouse 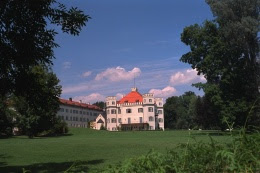 Here are the two settings for THE EMPRESS CHRONICLES: the first photo is of the empress Sisi's summer home, Possenhofen. A charming little castle, don't you think? Somewhat shabby by the standards of Bavarian royalty, but beloved to my character (who is a fictionalized version of the actual Sisi of Austria).

This is where Sisi frolicked and misbehaved, chasing her rabbits and dogs and siblings. Cooking up schemes to undermine her governess's agenda of civilizing the wild, spirited girl.

Here's a short passage from my book, illustrating this:

I could not wait to return to the comfortable worn splendor of our farm-castle, “Possi,” where my two ponies, Psyche and Cupid, were allowed to wander among the roses at will. Where my dogs roamed freely inside the house and out. Where my days began as the sun warmed the tops of the trees and ended when I decided it was time to return indoors. 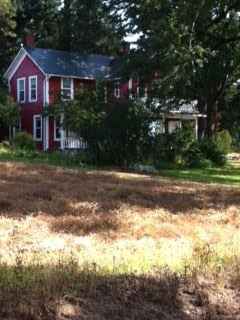 This other house is where my contemporary character, Liz lives during the summer the novel takes place. It's a farmhouse I lived in for three years in the early 90's. Like Liz, I had a hard time adjusting to country life. The whole, 'cooking on a stove from the 1930's' thing (seriously, it was hooked up to a five-gallon propane tank like a Coleman, and I lived in fear of it running out every evening as I cooked up the soup).

Here's a little bit of Liz, toiling with her new digs, after an abrupt move from the posh lofts of Portland's upscale Pearl district:

The windowless staircase was illuminated by a single antique sconce, which tossed its anemic light at a bent-over sunflower painted directly onto the wood paneling. At the top of the stairs Pops grunted and yanked my suitcases around a corner and continued down a long hall. I followed. We walked past a screened porch. Two wasps with spindly legs tangled with each other in the opening to the porch, and beyond them a different cat than the one that had rubbed against me downstairs sat coiled in a yoga pretzel licking its anus.

Now, oddly, the top picture looks fancier, but nevertheless, it was considered a shack by the Bavarian Royal Family. Sisi loves the country. Liz adores a penthouse view. Identical cousins, they are not. Plus, they were born a hundred and fifty years apart. So, dear readers, my question to you is: are you more like Sisi, or more like Liz? Is you a country mouse, or a town mouse?
Posted by Suzy Vitello at 4:26 PM 5 comments: 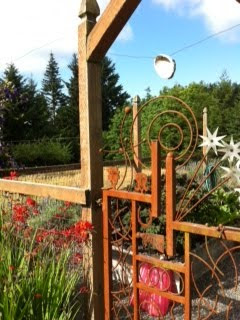 I've never been to Yaddo. Never applied for one of those sweet deals where you're sequestered from the monkey-mind real world and given a cot, a desk and a brown-bagged lunch courtesy of an Artist-in-Residence program.

Actually, I take that back. Ten years ago I was the Fishtrap Writer-in-Residence, which came complete with two-and-a-half months in a mountain cabin on the river. In exchange for the cabin, I taught in the Wallowa schools and at the Fishtrap House in Enterprise. The unfortunate aspect of all of that for me was I had two of my children in tow (one of whom was two-years-old). They got sick. Really sick. The potential idyll turned into an Oregon Trail nightmare involving medicine, ER visits, high fevers, infections and even a seizure. Writing? Ha! 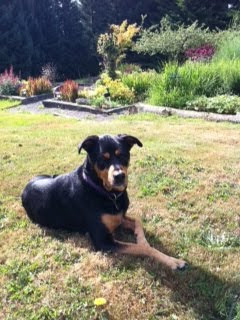 I've been a parent for my whole adult life. Many of those years I've been a single parent. Then there's the earning a living part. And my tendency to keep filling my plate with critters, gardens, volunteer work and sporting events. I write around the edges. In the cracks and splits of a robust schedule. Between reheating-my-coffee-in-the-microwave trips. That's my usual style.

But, my kids are older now. Although still unpredictable and busy, my work life is manageable because I have fabulous colleagues who understand that writing is my passion, and when I'm separated from it for too long, I'm cranky. I'm not a good producer when I'm pining for my stories.

Luckily, God invented August for people in my situation. 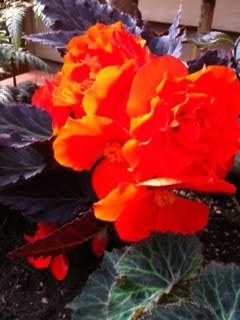 People (and clients!) go on vacation in August. Kids go to camp. And this year, some old, dear friends with a fabulous retreat-style house just outside of Portland are off camping. I eagerly raised my hand to be the one to watch their dog and water their garden in exchange for five days of space and time to write.

Here are some photos featuring some of the goodies up here. (Beauty and nature are particularly helpful when I'm editing--trying to solve plot issues, getting deeper into a character's head.) 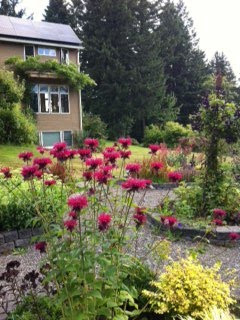 So, for me, it's harvest time: zucchini, beets, spinach, peas, carrots. I have a freshly caught salmon in the fridge. The dog is a wonderful companion for walks in the woods--and, I'm down the road from the setting for a book I'm revising. I'm picking through my sentences, too. Culling, planting, rinsing away debris.

Even though my DIY writing retreat doesn't carry the caché of the infamous 400-acre artist's enclave, it's what I got, and I'm grateful.

Posted by Suzy Vitello at 9:43 AM No comments:

Mike Chabala is the new face of the Portland Timbers 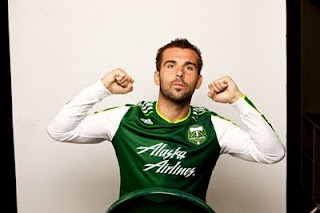 As those who follow my blog know, besides writing, my other passion is soccer. Nope, don't play it (other than to keep my 12-yr-old son in shape by smashing him now and again when he's juggling the ball in the house), but, as my dear husband will tell you, I can be a handful from the sidelines. Ask him if he still has any hearing in his left ear after last night's Timbers:Galaxy match--in particular, after the first goal of the evening in minute 26 by newbie Mike Chabala.

Background. I live in Portland. Ergo, I'm a Timbers fan. Last year, in prelude to PDX going MLS, I wrote this article for a local magazine. The piece focused on the anticipated fervor once Portland joined the Major League, and was built around a popular player, Scot Thompson, who the Timbers Army dubbed "The Man with the Golden Heart."

Now, a year later, those scrubby kits of the pre-MLS days are slick Alaska Air-sponsored jerseys. Our coach is a colorful dude with a Scottish accent (have you seen his hilarious Alaska Air commercial?), and Scot with "one T" Thompson is no longer on the pitch. So, who will take his place in the hearts of the Timbers fans?

Well, it was supposed to be Kenny Cooper. The 6-foot-3, 210-pound forward, who was aggressively plucked from the hopes of FC Dallas, made an early splash here in the Rose City. And then ... nothing.

Cooper is big. He's driven. He tries hard. Maybe too hard. I'm going to go out on a limb here and say something I might regret, but from what I've observed, Cooper is a beat too slow, and he lacks that weird nebulous quality, the instinct--the intuition, maybe--for making the killer play.

So strip him of the Captain's badge and slap it on Jack Jewsbury. Jack is a playmaker with an amazing foot. He's speedy, has crazy good sense of where his teammates are, and buries his PK's in the back of the net. "Cap'n Jack" is good, smart, plays well with others. So, is the the next Brandon Royesque Rose City icon?

I don't think he is, and here's why. Though he's plenty talented and solid, and he has the chops to make All-Star from the roster of a nearly-last-place expansion team, I'm not quite sure he's rowdy enough.

Yeah, you heard me. We're talking soccer, guys. The devil's sport. The game that used to be played with human skulls. Smoke bombs and fist fights and chanting. Sure, we play a somewhat squeaky clean game here in the Rose City. We don't brawl and ruckus and stab people in bars after our matches. But, I like to think that we've branded a particular fanbase. The same way Seattle invented grunge back in the dark ages, Portland has its own style. We are hard-core diy, we dress up small dogs in outfits and formalize citywide playdates for them, we've been known to stride naked down the street to make a point, and we have the biggest and best MLS fanbase in the country: the Timbers Army. And, two weeks ago, I think we finally got ourselves the right posterchild for our team. Mike Chabala.

Last night's amazing win aside, the second Chabala touched down in PDX, he started stirring up excitement on social media (hosting a Galaxy match ticket giveaway on Twitter for the best 'beat LA' rhyme), and giving the Timbers the best gift ever: a left-footed back with spirit, intuition, and attitude. Oh yeah, and the ability to find the back of the net! Plus: he has the look. Five-o'clock shadow, lumberjacky, kinda just rolled out of bed, sparkle in his eye.

Don't believe me? Check out the Timbers Facebook page. Scroll down to the "who is the man of the match" poll posted just after the Galaxy game and review the numbers. Chabala has that illusive quality, Portland-sized. He might not be inspiring teenage girls to tat his name on their arms ala David Beckham, but he's got that same special something we see in Brandon Roy and UP alum Megan Rapinoe. Pure love of game, a bit of cockiness, and the ability to lay it all down for the win. (And, hey, he's left-footed, so, extra points.)

All in all, Chabala is the best thing for the Timbers since sliced logs. I'm looking forward to seeing more of his prowess at Jeld Wen, and possibly his Timbers' axe-wielding self on one of those ginormous billboards.
Posted by Suzy Vitello at 8:54 AM 2 comments: