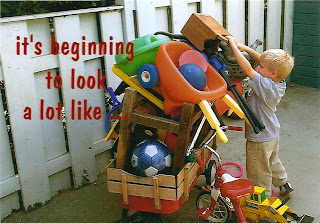 I hate shopping. I am a bad, anxious shopper. Malls make me go all deer-in-the-headlights, and I do my best to avoid them in December.

Now, I can handle the lull and herbal tea of a classy boutique. Or the endless tasting parties at, say Trader Joes or New Seasons. Got chocolate? I'm there. But when you have kids, the call of the Big Box Store is all too ubiquitous.

When my youngest was a toddler, he liked nothing more than to stack all of his toys in a tsunami swell of stuff. I think it grounded him to bear witness to the sum total of his terrestrial stock--but even more, repeating the tasks of acquisition seemed to nurse an addiction. He was a little hamster wheel of need with the stacking and locating of his crap. Which, in a two-year-old is sort of cute, yes?

But in a 70-year-old, that behavior is less so.

The other day I was treated to an episode (#46: Ron/Carol) of Hoarders, featuring my ex-husband's uncle--yup, that would be the great uncle of that little guy you see in the picture above. I watched with interest, and then revulsion and sorrow as the subject, Ron, led the Hoarders crew through his stockpiled ramshackle abode. Books, papers, collectibles, knick-knacks, were all precariously heaved into chest-high hills with no pathway between them. A burner left on for heat sent a flame within inches of the combustibles. His "bed" was a mattress atop a makeshift loft that bowed downward, onto metal debris, ready to crack any minute.

But that wasn't the worst part.

Ron--who has an advanced form of prostate cancer, it should be noted-- was confronted by his only child, my ex-husband's cousin, who led the Hoarders intervention. Ron's inability to be accountable for the havoc his hoarding caused in his primary relationships was excruciating to witness. The denial. The stubbornness. It was the end-stage of the behaviors I struggled to understand in my ex husband, and ones that are all too genetically wired into my son.

The older I get, the more evidence I collect for the theory that living is simply a set of practices, one after the other. Intention starts the ball rolling, but it's only a spark. A tiny catalyst. It's the actions that ensue that make or break a life. The things a person does, repeatedly, are the only concrete clues we have to their personhood.

In the Hoarders show, it ended with Ron putting an arm around his daughter. Placating her, yes, but offering the only gesture of comfort he knew how to dole out. He was a man comfortable with himself, unwilling to change, and not entirely without introspection. He'd convinced himself that his patterns were indelible. His prostate cancer has spread to his brain, I heard. Brain cancer is a pretty undignified way to go out--but I have to say, no less undignified than being buried beneath piles of treasure.
Posted by Unknown at 9:18 AM

Email ThisBlogThis!Share to TwitterShare to FacebookShare to Pinterest
Labels: hoarders