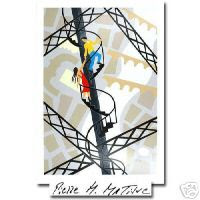 the finish tape is in view

I work best on deadline. People say that a lot, and when we hear it, we nod. Yeah, okay, who doesn't? If you really think about it though, there's always a deadline. Sometimes it's soft and squishy and semi-transparent, and other times it's in six inch block letters on a whiteboard.

External deadlines advertise their existence with a price tag: opprobrium, disappointment, money. In my case, hair.

In two days, I must deliver on the challenge to offer up a complete manuscript. I am pages away from this--have paced the ending to the hour. As though Thursday is the 26.2 mile mark. If that were true, I'm at 24.8 miles right now. Maybe 25.1. Anyway--I'm close enough to smell it. Additionally, though, I have a website to launch, myriad delineated milestones to accomplish, a sick kid upstairs and end-of-the-month billing to do. Without the indelible and consequential deadline, my novel would still be hovering around the 18.3 mile mark. Or maybe even 17.9. Competition for my attention is pretty dang fierce 'round here.

Okay then, it's 6:3o a.m., and I have client work lined up for most of the day--best get busy running that last mile.
Posted by Suzy Vitello at 6:26 AM No comments:

Here I am, a glass of rose by my right hand, next to my mouse. Yes, I'm writing under the influence. Can't help it. In the tradition of all drunken writers: Falkner, Carver (okay, he got sober), Yates, I'm resorting to alcohol to finish this fucker.

Reason why? It's headed into some scary, dark material. The realm of creepiness. It's hard to see Frances go through the revelations she must endure in these final chapters. Today I had to break it to my main character that her beloved had kept a life-long secret from her, as did her brother. She has been left to steer the family wreckage, her husband having long abandoned her, and her job on the line. It's all so very sad for poor Fifi. And there's no time to give her a lover or a great career. She's left sopping up the muck, and now I must prepare for the last scene. The scene I wrote and rewrote in my mind a hundred times--all the while trying to avoid the inevitable.

Somehow this final scene, in addition to destroying the sacred, must also point to redemption. To an unknown future of fulfillment and happiness. Not happily ever after, exactly, but risk and reward.

Ah--put the glass of rose down, Suzy. Go to bed. Wake up early and get it done. If you don't the natives are ready to scalp!
Posted by Suzy Vitello at 7:44 PM No comments:

Last summer at Bread Loaf, Lynn Freed had us write last paragraphs to our novel. It was a grand exercise. Really hard.

From my position, still very much at the beginning stages of a first draft, I stuttered and stammered and wrote a horrible passage based on an inorganic ending that I hoped would fix itself when the time came.

Now, over a year later, the entire third act of the book is vastly different than originally conceived. My final scene is based upon another conceit entirely. What was I thinking?

The exercise itself was invaluable though. A way to jump start the plot muscle--force the writer to consider structure in the design of a novel. Now, a few chapters from the end, I am writing to that last scene--I see it clearly, and it is both compelling and daunting.
Posted by Suzy Vitello at 3:40 PM No comments:

thursday night at the table 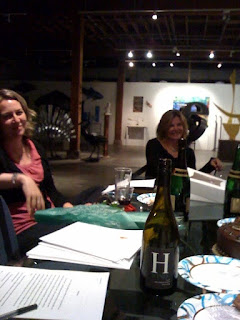 Here they are, two of the nine folks I gather round the table with every Thursday night. Every writer should have a support system --one that carefully considers her writing, while providing an opportunity for critical engagement.

These guys kick my ass! And they also encourage me and inspire me and promote me. Last night we celebrated a birthday, a manuscript completion and a NY Times best-seller inclusion. Not bad for one night, eh? Oh, and the cake was incredible!
Posted by Suzy Vitello at 3:36 PM 1 comment:

A few years back I got to spend an entire week in a classroom with this guy at Writers at Work in Utah. He's awesome. Here's his message. Buy his books. Really.

a chapter a day keeps the scissors away

I've got a freakin' head cold! Now, on top of racing to finish my novel whilst bringing home bacon and the usual mom stuff, the threat of a bob on top of puffy eyes, red nose and achy joints joins the fun.

Not that I'm complaining.

The only way I'm getting this done, at this point, is to write a chapter every freakin' day. I have 15 days, and probably 12 chapters left. That leaves three days to edit roughly 350 pages.

The good news is: I'm almost at 300 pages of "mostly" usable content. Hope I don't run out of Kleenex!
Posted by Suzy Vitello at 8:53 AM 2 comments:

Last night at workshop, we convened for the first time since the threat of "the bob."

I was pleased to deliver a semi-successful chapter, get great feedback and feel inspired to sprint to the end of the book.

That said, today's writing engagement has been less than stellar. The muse is off doing her laundry, and my attention has wandered to lives and projects of others. Nothing new. I must dig in deep, and carry on. Meanwhile, though, a buddy of mine sent this cartoon. Timely.

Posted by Suzy Vitello at 1:44 PM No comments: 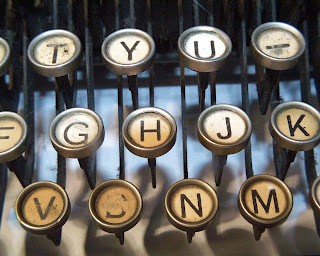 I am disgusted to admit how externally motivated I am. With the threat of hair snippage, I've maintained a vigorous writing regime these last several days, blasting into the 70%+ wordmeter count.

It's sort of like the reunion I dreaded going to a couple of months back. I couldn't fathom the psychic, emotional and strategic energy required to fly East and undertake a room full of people whose names I'd long since dismissed. And that ice-breaker night--true to fear--was paralyzing. I stammered and guessed and whispered my way through the evening, embarrassing myself several times over by mis-remembering just about every detail about high school.

The next night, the fancy night, was much better. Classmates emerged from the pea-soup fog whole people, with names and relationships and memories. They jumped off of the two-dimensional facebook palette and into human form. This is becoming true of my merry troupe of characters as well. They're marching out of abstraction and becoming, once again, friends with whom to tip a pint and tell a joke. I like it.
Posted by Suzy Vitello at 2:13 PM 2 comments:

hello, my name is suzy, and I'm a character protector

I'm closing in on the end of the second act here at novel-writing central. I'm frankly appalled by the behavior of some of my characters. They don't seem to want to learn from their mistakes!

At least Frances is beginning to cooperate. She finally left her crappy marriage and is starting to deal with her denial. Starting to. God, I need like an Alanon meeting for writers: coping with your character's addiction. Seriously... I need to kick Frances into the fire here. She needs a good dose of danger--I 've got to stop protecting her from herself! These next few chapters--it's tough love time.
Posted by Suzy Vitello at 10:28 AM No comments: 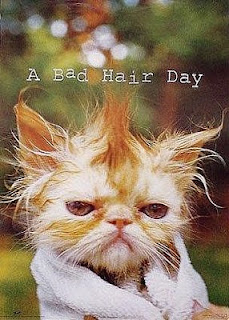 So I went to a book launch party last night. All the usual suspects--the writers and their significant others and various Portland luminaries--were present. It was a great party, actually. One of the most fun evenings of the past year.

I found myself, once again, lamenting my lack of focus, and yammered on about not having, after two years, a complete manuscript. While my colleagues pound out the pages amid other work, raising kids and having packed lives with external commitments, I continue to fill my days up without tending to my novel. It's like my garden. I have all the intentions in the world--cultivating a weed-free paradise with dahlias and asters and roses and pruned trees and contained vegetables that bare spotless fruits. Alas, my actual garden is an over-grown squash factory with bolted stalks of aphid-crawling who-the-hell-knows-what-all.

And so it goes with The Secret to Love (or Stairway of Love--I'm still on the fence about that). Weeds have thrust themselves up in the white space of time. I have to reacquaint myself with the texture and tone each time I sit down because of the passage of days, and sometimes even weeks.

At the party, I was tired of hearing myself whine about my lack of commitment, and so were, I'm guessing, my writer friends. "You know what?" said my industrious Virgo friend Cheryl, "There's going to be a consequence if you don't get this done by October 1st."

"A consequence," muttered the chorus of others in earshot. "Yes, a bad consequence."

Cheryl gleefully offered: "We're going to cut off your hair!" And Lidia said, "Into a bob."

Me with a bob would look like Bozo the Clown, except maybe without the bald part in the middle. "That's horrible," I said.

The writers made fake hair-cutting motions with their fingers. "A bob," they said. "Unless it's finished."

And then Cheryl, who immediately realized that I might be moved to cheat, said, "And you can't just slap anything into the manuscript and say that it's done. I'm going to read it, and if you put like, copied and pasted words from somewhere, you're still getting a bob."

According to the notes I scribbled in the tent last month, I have eight significant chunks of things to have happen. Eight as-of-yet-unwritten chapters. Meaty chapters. What am doing writing about writing instead of writing? I have 24 days until the dreaded bob. It's like a reverse advent calendar--with the big "Christmas" window in the middle being either a bob or a finished book.
Posted by Suzy Vitello at 12:15 PM 1 comment: 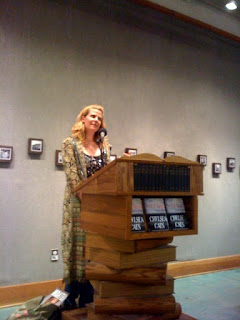 Chelsea Cain was terrific at Powell's last night, reading her third "Gretchen Lowell" thriller in the series. "Evil at Heart" is the funniest, gruesomest one yet, and Cain has become quite a book tour pro. (She even brought Voodoo Doughnuts for the audience to snack on during Q & A).

Look how big her name is on the book! She's a superstar!

Posted by Suzy Vitello at 8:33 AM No comments: