My days are spent alternating between fondling sentences and wrestling words to the ground. Sometimes, the other way around. Occasionally words pin me to the mat so hard, I lie helpless, paralyzed, suffocating. Block, you say? I think not! When words fail me it's more like homicide. Writers' Homicide. The pen of self-inflicting sword-like slashings.

This is not happening at the moment, as a certain mania has taken hold, and I'm serving up words as fast as a short order grill cook--but a couple of weeks ago, I experienced a frightening lull in my ability and desire to write.

I've been told that those periods are fertile ground for collecting, as opposed to spewing. That they are every bit as important to the writer's cycle as output. I've always been skeptical of that. Somewhat. What I realize in hindsight with this particular go-round is that there is a difference between active and passive wool-gathering, and it has to do with synthesizing information, putting it into context, and filing it in the creative part of the noggin. It's not fugue state, but rather, extended curiosity. Making space for inquiry.

Now, on the other side of this Writers' Homicide, I'm ready to go out and slay a thing or two.
Posted by Suzy Vitello at 5:05 PM No comments: 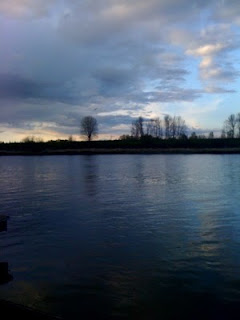 Yesterday, at 3:30 p.m., my house officially passed along to its next owner. As with many big life transitions, the exchange was marked by last-minute drama and craziness, but in the end, the transaction prevailed, and I am now officially a renter.

Next week I will once again be a homeowner, but for now, I'm basking in the interstitial splendor of it all.

To fully appreciate my respite from real estate, I've taken advantage of my good friend Laura's offer to hole up in her houseboat for a few days.

This morning I'm looking over the channel, watching low-flying geese flapping and honking in pairs, swerving to miss the occasional tugboat or barge. My husband left early this morning for his job as a teacher across town, and I immersed myself in some writing as the river and sky unfolded in light, feeling the invitation to absorb the minutes of the day instead of scything through them.
Posted by Suzy Vitello at 7:20 AM 2 comments: