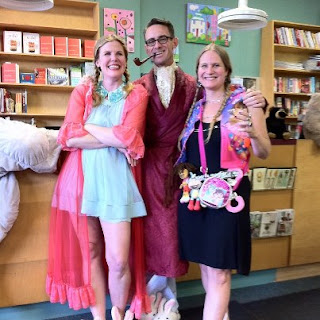 Go to any happening, any event -- concert, sports, literary -- and the most ubiquitous aspect is the bevy of rectangular discs surgically adhered to the palms of the people. The viral share--the YOU ARE THERE--the feeding frenzy of HERE'S WHERE I AM RIGHT THIS MINUTE -- delivered in scooping haste by the masses. Gone are the dusty press-pass-toting members of the media, who, until very recently, everyone relied upon for reportage. Well, maybe not gone, exactly, but certainly upstaged.

Case in point. Last night three members my writing group, Chuck Palahniuk, Chelsea Cain, and Lidia Yuknavitch, teamed up to help launch Lidia's latest book, DORA: A HEADCASE. The venue, one of a handful of surviving indie bookstores, made 100 tickets available (and were sold out within the hour) for this unique confab: bedtime stories for grown-ups. The idea was to spike sales for DORA, while benefitting a brick-and-mortar book store by offering something you just can't get via, ahem, Amazon. Yes, there were adult beverages involved.

Well, the media showed up:

and, as is their style, the on-the-beat reporter began to voiceover during Chuck's reading of a story he'd just, that afternoon, written. Well, if there's one thing I've learned about Chuck lo these 20 years I've been in workshop with him, he's 1) not fond of being interrupted while reading, and 2) he thinks  lightning speed fast on his feet - even when they're covered in bunny slippers. 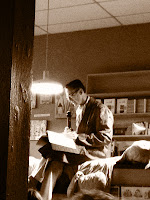 After a brief brow furrow, the ascot and smoking jacket-clad Chuck put down his fresh, reasonable story and picked up a three-hole binder (another Chuck thing--the binder). "That's it, I'm reading the dirty one," he said. "No going back."

So while the reporter snagged Chelsea for commentary, and muted Chuck's super graphic, sexual, shocking and amazing reading of the sort of story that has the editors of Playboy salivating, the audience collectively squeezed their prized stuffed animals and got all Harry Potter-eyed while the iconic author of FIGHT CLUB hefted the lets-get-you-good-and-uncomfortable bar to new and glorious heights. Again, demonstrating how now, more than ever, art is defined on-the-ground, by the terms of the artist and audience. Which is really what this celebration of transgressive fiction is all about, right? And what better place than Portland to show it, eh?

What's the coolest event you've been to in the last year?
Posted by Suzy Vitello at 11:18 AM