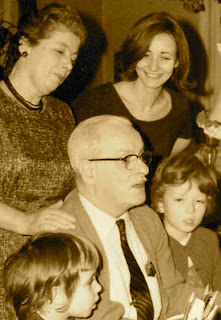 The holidays are awash with sentimental invitations to take a walk down Lane Memory, are they not? How does that Streisand song go again? Now, in addition to misty watercolor memories, I have digital detritus to comb through whilst I tarry in the land of Before Now. Five-and-a-half years of blogging to revisit.

Just for fun, today's post is a reprise of one posted in December, 2006. It's an experiment in staying power, and a tribute to the cross out, blatant edit, horizontal disclaimer, delete-but-not-really tool in the blog bag. What fun!

The thought snuck up on me today, on this, yet another “shortest day of the year,” December day, that I am only 20 15 years younger than my grandfather was when he died on the table during open heart surgery. I am 20 15 winter solstices away from that age. Sobering, but oddly, not in a bad way.

Meanwhile his wife, my grandmother, rots slowly in a nursing home. She is 94 99.


When my sister and I were children, we spent many summers with our grandparents. They were Austrian immigrants, and their house (where my sister and her family now reside) was appointed with all manner of Viennese Bourgeois mixed with Tyrolean kitsch. The cut crystal. The gleaming Steinway. Shelf upon shelf of Hummels. The kitchen smelled of sour cherry jam spread on warm toast, and that smell mingled with oil paints and turpentine from my Oma’s back porch studio adjoining the kitchen. Separating a formal dining room from that studio stood a built-in, floor-to-ceiling teacup display case. On every conceivable occasion, it was my grandfather’s habit to present to his wife a fancy teacup and saucer.

My grandfather’s office was separated from the house by a garage, and at the noon hour you could hear the series of doors opening and closing as he made his way over for lunch. My grandmother would serve him a frankfurter, some brown bread. A little cucumber salad. Opa wolfed this down before striding over to the piano in the parlor, where he spent the remainder of his break time playing mostly original music. Stuff he’d spent decades composing, erasing, composing.

My grandfather was a physician by trade, but his artistic nature burst cholerically from every cell. He sketched, he wrote poetry. He built my sister and me a lavish, multi-story dollhouse with every miniature refinement found in their own home: little Victorian chairs, cabinets festooned with bric-a-brac. When my father, their only child, was a boy, the result of Opa’s obsessive handiwork was a railroad masterpiece spanning half the cellar. Not wanting to leave anything out, Opa fashioned forests and mountains. A village bisected by a paper-mache creek. The railroad sat in grave disrepair during my childhood, finally becoming permanently disassembled by my sister and her husband ex-husband just last year a few years back.

My grandmother was a temperamental hausfrau, ruled and defined by the degree to which she felt uncherished. Her sole creative outlet, painting pictures that became more and more abstract as she aged, was not embarked upon until she reached 50. Compelled by duty to engross herself in quotidian tasks she abhorred, she became as brittle as her teacup collection, over the years. And yet. And yet. At 94 99, she somehow continues to supply the necessary trickle of blood to her wounded heart.

That my grandparents had a horrible marriage intrudes vaguely on my recollections of them. (Much like the ever-present tinge of turpentine still permeates their house.) The sharp bickering between them, cast in German aspersions, is far less defining to me than their strong personalities. My grandfather clearly could not bear to spend time in the same room with his difficult wife—a woman who has outlived him by over 30 35 years, keeping the same middle-aged likeness of him in a gilt-frame within arm’s reach of her bedside. But still, I continue to think of them as a pair of bookends—Oma riding shotgun and Opa trying to escape.

So here, on yet another winter solstice day, I have more humanness than I can easily contain. I am feeling deeply part of a tribe, and less alone, actually, than usual. I feel weirdly connected to my dead grandfather, a man whose heart gave out from over-use. I feel, in turn, playful, adventurous, contemplative and, well, I’m just going to say it—sexy. It’s part unfettered liberation (hard won and playing, always, with guilt), and part flagrant gratitude. In short, I guess I just I’m just having a good day—even us dark, over-thinkers can have those now and again.

Addendum: On a revisiting my solstice walk through Forest Park this afternoon, my grandfather's presence loomed even closer. That he would have loved the park, that he died decades before I moved to Portland, and that my grandmother, upon hearing that I'd moved to Oregon muttered only, "But Washington is so much more beautiful!" all seemed a harmonious and fitting alignment to my solo trudge. Oddly, a freshly fallen monolithic fir (the last storm sent this puppy crashing down over the path, to rest atop a tree that had fallen in a storm a couple of years nearly a decade ago) gave me pause. As did a brand new bench, memorializing someone young. The epitaph on the plaque from RW Emerson read: "The measure of a life is not in its length, but in its depth."
Posted by Suzy Vitello at 1:05 PM