Today I woke up early and went off to the dentist for some drill and fill. The decay was particularly loathsome, festering away in the backest of my back teeth. The dentist kept shaking her head and reengaging something called a bur, then doing a "carries check," then back to the bur, whilst I sat there with my ratcheted open jaw.

I left the dentist's office with a numb mouth and the directive to come back next month to have a crown replaced. Joy.

So off I scuttled to my favorite neighborhood latte place for a rousing one-woman pity party, my sore mouth another reminder that the wheels of time don't move backwards. More dental work, more decrepitude, more decay in my future. Poor, poor girl.

The latte cheered me up though, as did acknowledging that I was sipping it down the street from my first house in Portland. I moved here 22 years ago this week, and as that realization dawned on me, I decided to reward myself with a nostalgic and hedonistic trip down memory lane -- which culminated in a spontaneous Timbers Reserves soccer match, because, hey, why the fuck not!?

I took a walk. There: the bungalow where I first marveled that tomatoes could still grow in November. The store that used to be a toy store that my kids called "Halloween" because it was there that they first experienced a face painter. Where Trader Joe's now stands, there was once Thriftway, to which I'd dash off for milk while my babies napped in the apartment across the street (what's the statute of limitations on child protective services, anyway?). The park where Sam first learned to generate his own lift on a swing set, and where Maggie first spied an amputee and shouted, "Hey that girl's arm is broke off!"

Northwest Portland is my brier patch. My salmon-spawn stop. The neighborhood most likely to cause me to sigh, tear up, or change some significant aspect of my life. When I moved here 22 years ago, I had a baby on each hip. I had an unruly mop of 80's hair (as opposed to the unruly mop of 2011 hair I sport currently). I was in my 20's. I had no idea what lay ahead and frankly, I didn't care.

Life proceeded, unfurled, grew up and out. Boyfriends, husbands, another child, a new degree, publication. Projects, jobs, stories, houses, rejections, cars. The usual. Portland has seen me through a bunch of lives. Movement through its quadrants. The blessings, the tragedies, the myriad miracles and disappointments.

I gotta say, though. I can't imagine a city more conducive to building a writer. Not a week goes by without a meaty literary event or book-related happening. Even before Wordstock (anyone remember LitEruption? I think that was even before websites!), this has always been a writer's town. And a reader's haven. A place where a mouth can go slowly to shit whilst the muse keeps thinking up new tricks. God, I love living here.
Posted by Suzy Vitello at 5:00 PM 5 comments:

The power and grace of Abby Wambach

Nothing like a night with a US National Team to bump up the swell of pride we Americans are so famous for. Last night's energetic soccer exhibition match against Canada was such an occasion. Jeld-Wen is a fabulous venue for national spirit, with its practiced army chants and well-timed cheers. The only thing missing was the green smoke from bombs-bursting-in-air that stayed in the opening anthem.

A rare hot late September night helped, no doubt, and the sell-out crowd stayed until the bitter end, when Alex Morgan nonchalantly stabbed in the third goal in the last second of extra time. Well, most of the crowd stayed. Kirk, Carson and I prematurely departed at the end of regulation, thus relegating my witnessing of the third goal to You Tube.

We were in the stands for goals one and two, however, delivered passionately by Abby Wambach. Die hard fans couldn't have scripted it better -- keeping the game scoreless with several "almosts" by Rapinoe against the crossbar, right up to the 63rd minute for goal number one - an expertly placed left-footed strike by Wambach, and then, as the perfect follow-up, a crowd-pleasing diving header to all but clinch the win in minute 70.

Nothing against pink-studded Alex Morgan, who's extra goal added dessert to the meaty meal at Jeld-Wen, but for pure athleticism and inspiration, Wambach knocks it out of the park. Thousands of young girls in the stands were witness to a role model who is the pinnacle of power and grace, and that alone was worth the price of admission.

Ack! Blogger has coerced me into adopting their new interface and I am SO not in the mood for a learning curve. Curses! I guess that's why I'm in the kitchen today--disaster must be in my horror-scope.

Basically, what I wanted to do on this post was call out my genius friend Lisa Golden, and her very ambitious blog project: "30 Day Photography Challenge."

Today's topic was "fruit" and her post is a hoot. (I did not mean to rhyme there, so I'm blaming it on Blogger's new interface).

Next to her ambitious creation, my post is a pathetic fetus, but, I'm just so damn proud of this year's tomato crop, any excuse to show it off will do, so I'm snatching Lisa's coattails and doing my own "fruit" blog. Yes, those are eggs from the girls in the background, but eggs are not fruit, not really, so disregard them.

My version of the fruit story is how to take perfectly lovely ingredients and ruin them. Or: Cooking with Suzy!

1. Assemble your raw harvest, and unearth your George Foreman grill:
2. Prepare your ingredients

3. Forget whether the correct sequence of patty coating prep is eggs, breadcrumbs, tomato sauce OR eggs, tomato sauce, breadcrumbs. Experiment with both, and then wonder if you should drizzle olive oil and salt on after grilling or before.

4. Push down the lid of the George Foreman grill and go off to answer several emails. Forget you were cooking, and get reminded by that unwelcome burn-off-of-new-appliances smell.

5. Ah, well, these will be the "first pancake" then, yes? Good thing you didn't have lunch yet and you're starving and will therefore eat anything. Taste the deliciousness of the nonstick surface which permeates the burnt coating.

6. Think about how to make the final product look more like Foodie blog features, and less like shoe insoles. Should you pluck some herbs from the patio? Should you drown the patties in hot sauce?

7. Resolve that next year you'll enjoy your harvest as you would flowers. Set them in bowls around your home until they mildew and wilt, and then feed them to the chickens. Leave the cooking to your husband!

and now for something obscenely frivolous 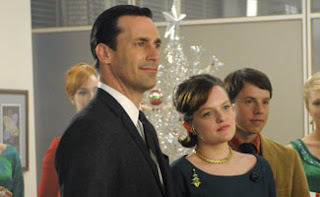 Over the weekend, the Academy of Television Arts & Sciences Creative Arts Emmys awarded Mad Men the Outstanding Hairstyling for a Single-Camera Series. Rock on!

I'm completely counting the days until the show resumes, but for now, I'm content with Netflixing the seasons for my mid-century dysfunction fix.

Oh, and the deets: the award was for the Season 4 episode "Christmas Comes But Once A Year."
Posted by Suzy Vitello at 11:22 AM 2 comments: