let's talk about the hottest writing group in Portland 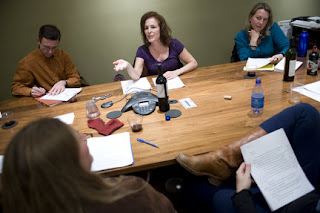 He did a great job (and I'm not just saying that 'cause I got the call-out in the print version and Cheryl Strayed was quoted as naming me the "best writer without a book in Portland") capturing the spirit of our merry band. And, I have to remark that, it's not exactly easy to flesh out a profile on a large group like ours. It's sort of like writing a scene with multiple characters and keeping the energy moving forward. The juxtaposition! The flow! The dialogue! Baker nailed them all.

Now I'm going to take my "house mother" self back up to the soccer pitch where fifteen eleven-year-old boys need cheering on!
Posted by Suzy Vitello at 9:46 AM 2 comments:

Trying to be fueled by distraction

My son woke up today and narrated a very interesting dream. His first ever (as far as I can tell) stress dream. All the players in his eleven-year-old life were featured, and the first person character kept getting into trouble.

It got me thinking about how storytellers develop. How much is narration, how much is perspective, how much is will. My little guy is on the cusp of adolescence and pushing against everything he knows while clawing to keep safe and secure in his frame of reference. It's the hardest time to parent, because as a mother you're continually stretched between the whole roots-and-wings concept. Allow enough unstructured time for creativity and personality to bloom while staying very, very close to set the walls up just in the nick of time.

It's the main reason I moved my office back home, and I have to keep reminding myself of that.

This week I have Carson in "skateboard camp"--again, trying to straddle the line between structure and fun. Skateboard camp is a little more lax than, say, baseball camp, as noted when one of the "instructors" handed me the medical release form he should have given me yesterday. "We sort of, um, forgot."

Meanwhile, I'm trying to figure out how to keep from going upstairs for another plate of hummus and Ak Mak crackers every five minutes.

Years ago, my colleague Monica Drake and I hosted a workshop that she named "Fueled by Distraction." The idea was to harness the energy of distraction to pour into satisfying art rather than to be derailed by the myriad distractions we artists are so seduced by. (And that was before Facebook!)

Wherever I am, the tendency to jump ship on deep concentration is pulling at me--and working from home offers a whole new array of possibilities. This week though, my son is sequestered in a concrete bowl being supervised by stoned teenagers. I need to seize the opportunity and get to it. But first, another mug of microwaved coffee...
Posted by Suzy Vitello at 11:09 AM No comments: 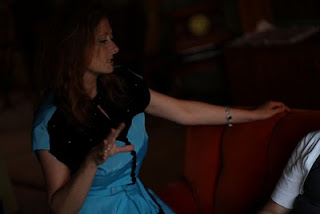 Today I woke up with a sore throat and a bad attitude. It was Monday, and I usually love Mondays because they herald structure, and structure, for a person of scattered tendencies, is a good thing. But today, on the heels of our big Mad Menesque soire, my son's graduation from the U, and myriad loose ends, I sorta didn't want to get out of bed.

I am a bit adrift right now--having passed my novel off to an agent for appraisal, and sorting through the various false starts and stories that could be forever tightened, and the screenplay I have just begun, not to mention a queue of work-work, an overflowing inbox, the beck and call of social media, the need to keep up, respond, reply, etc, I, plain and simple, wanted to go back to being a hostess at a cocktail party.

I ticked off the work stuff, watched the gorgeous Spanish men win a soccer match, and noted that it didn't rain today (although it's still MUCH TOO COLD), and did nothing for my writing. I did not write at all! Not a lick. Bah!

Tomorrow, then.
Posted by Suzy Vitello at 5:16 PM 1 comment:

Today my youngest child took part in what serves as a graduation ceremony from elementary school. I use the qualifier because the public school system prefers "promotion" to graduation, but for me, the semantic distinction is silly. For more than half of his life he's reported to a building, been part of a community, and now he's leaving it. He's graduating.

And it's a big deal.

Don't get me wrong, I'm not about to rue this passage or lament this leap away from childhood, but I will weep. I'm certain of that. I will tear up because that's what mommies do when their babies are clearly not babies any longer. A huge piece of my heart is in that school. It's where Carson lost teeth, learned to read and write, and gained prowess on the jungle gym. As their "promotion" song suggests, the friendships he made at Maplewood will stay with him until he breathes his last.

Here he is, the smaller of the two boys in red t-shirts, dancing something called "the jerk." Thank God he's still young and innocent enough not to get the irony in that name. For now, anyway!
Posted by Suzy Vitello at 10:22 AM 4 comments: 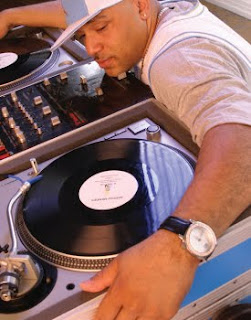 I love writing about Passion. Watching passion unfold in a fledgling writer, or a writer who's had a breakthrough. Lately, I've had more than my share of opportunities to be part of the Passion Parade.

I have a piece on David Jackson in this month's Goodness Magazine, and it's one of the few times I've enjoyed re-reading something of mine in print--rather than scanning the article for errors, as is typical, I sunk into it, like a reader, and allowed the subject and his zest to talk to me--invite me into his world--which I gladly relived.

I've also been working with a visual artist, helping him find his voice inside of a series of lyric essays. The process has been delightful and engaging. Working with this client, I get to revisit my own journey with the pen, discover anew why it is I do what I do. The magic of it. The sweet whisper in the ear. The disappearing hours. The floats and marching bands--even the shitting parade horses. I've never been a Rose Festival Queen, but I'm feeling pretty damn happy with my baton.
Posted by Suzy Vitello at 10:31 AM No comments: