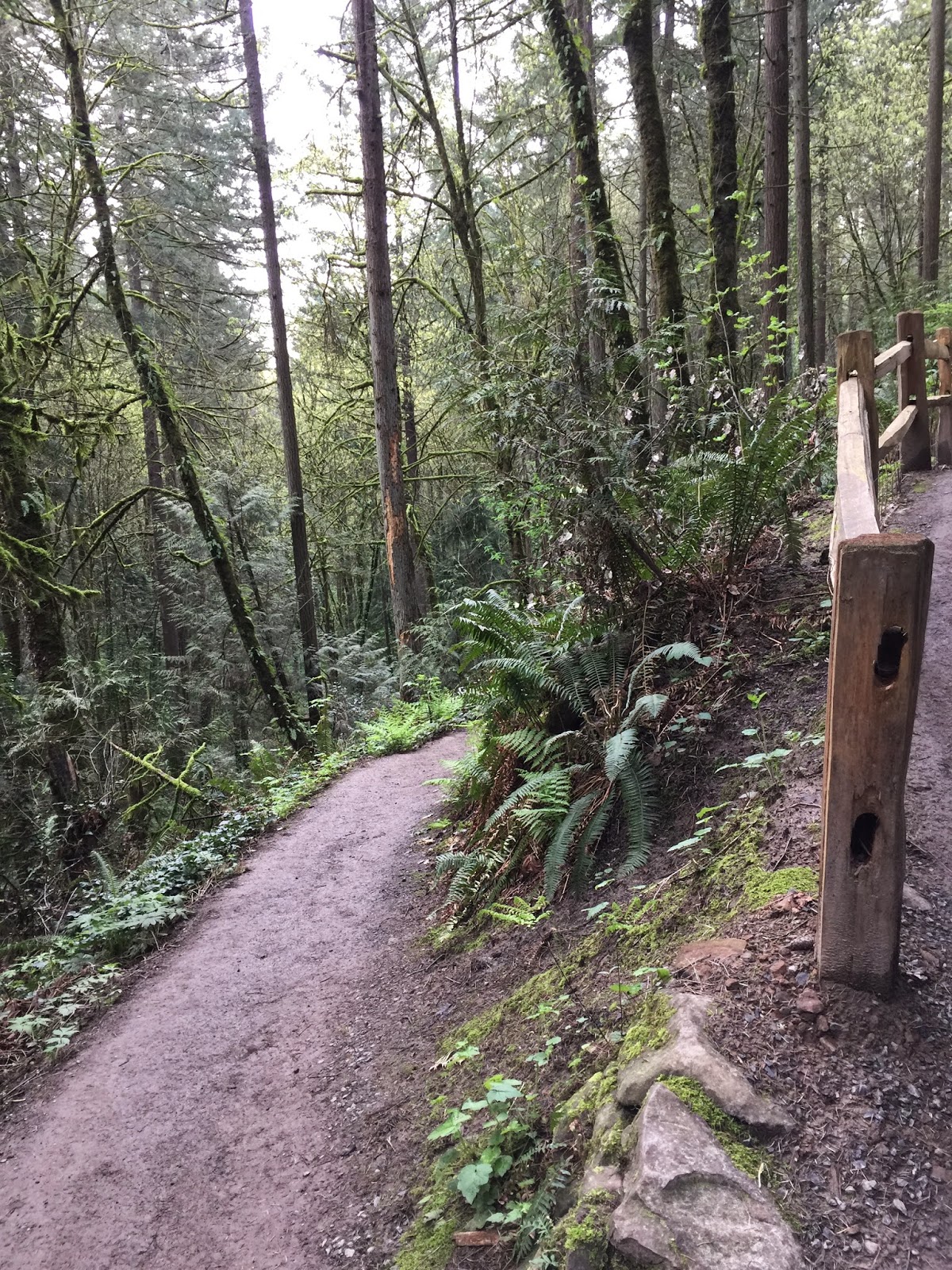 Twenty-six years here and I'm still bowled over with the transformation each spring. The saturation of color, the bone-deep fecundity. A particular shade of the brightest of greens; the verdant rubber of new fir. Portland is known, normatively, for roses, but ferns, cedar, trillium and moss rule here this time of year.

Walking distance from my house are miles of trails through typical Pacific Northwest forest. If I wanted to spend a day in the woods, I could wander for hours, up hill, down hill, elevation changes amassing triple digits if we're talking feet. You want to knock off some steps? Come to my house. We'll send your Fitbit into apoplectic spasms.

Today, between projects like I am, and looking for inspiration for my next book, I decided to assuage my curiosity about the "ultimate Portland excursion."

I'm in that lovely early "dating" phase of my new project - the first 5,000 words where I cobble together snippets of ideas and then go hunt for context. In both The Moment Before and The Empress Chronicles, my characters (teenagers) tend to walk a lot. They move through landscapes that are sacred to me. They make decisions and come to realizations in some of my favorite places.

So many hours we writers spend at the desk. Our research is often conducted via search engine. Our insights are somewhat fueled by an imagination jacked by Twitter trends and the like. I'm not judging; it's just the way things are now.

For me, though, it's hard to access the deepest level of "what if" without a slog through the three-dimensional world. Maybe it's just that I'm at the mercy of my senses - all of them together. The chill cut of drizzle and wind against my ears. The variety of hues in a popular Oregon cultivar. The smell of decaying pine needles. The sound of a happy retriever churning the mud on a trail behind its person. Even the metallic taste of Bull Run water gurgling from a Benson bubbler. All of this is part of the training. The interstitial ingredients between desk sits that contribute the final product.

So, today, I went for an exploration - traipsed along the 4T on a cold spring morning, and it did not disappoint. 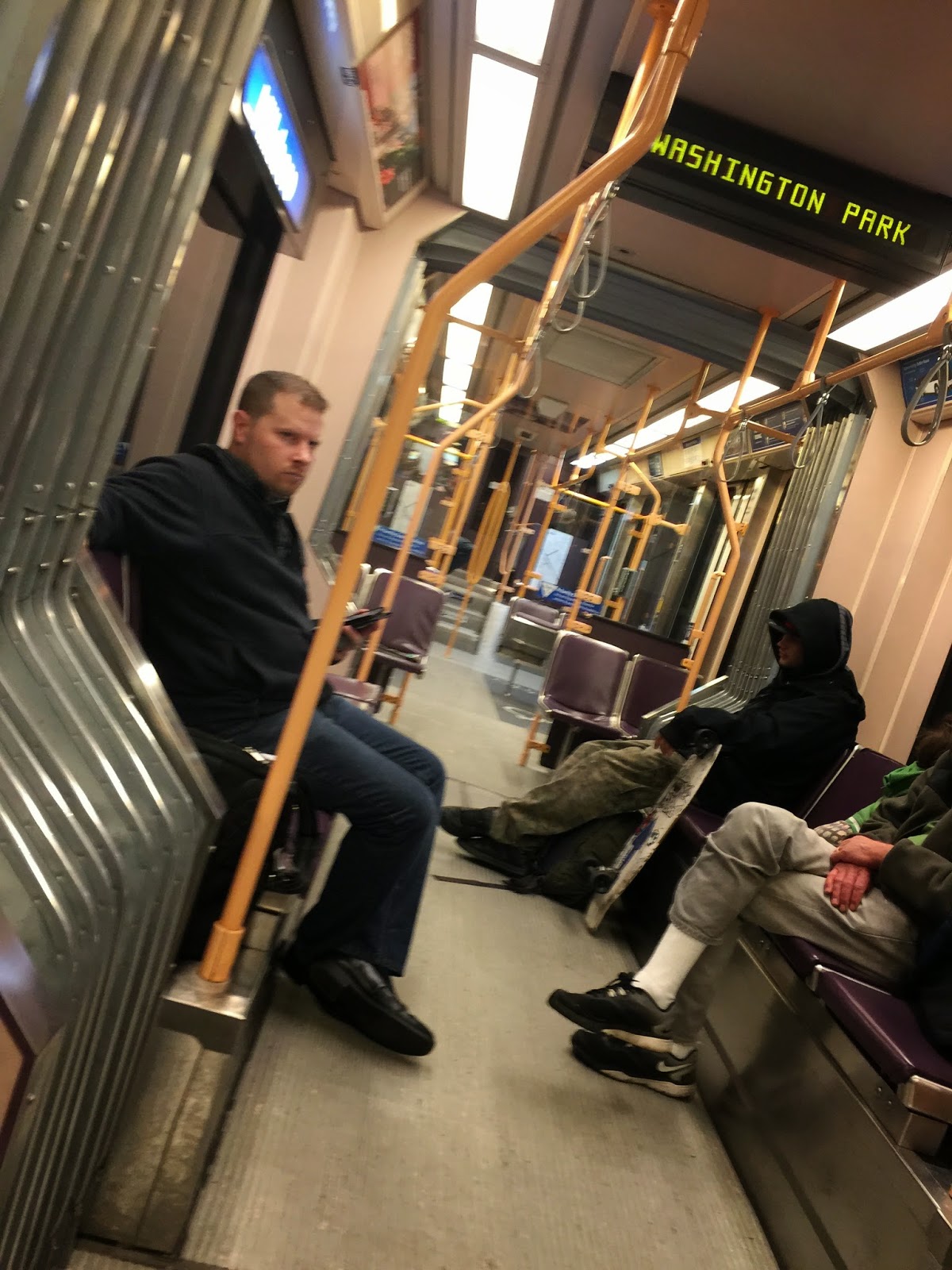 I dropped my son at school, then parked the car in a downtown garage. Hopped on the MAX to the zoo, then trundled across the parking lot to where there's an overpass that spans above one of the busiest corridors in Portland. You have to actually walk down the onramp before connecting with the trail through the forest to the highest point of the West Hills. I will admit, that first quarter mile up this wooded muddy bank, all the highway traffic sounds below me, I was a little freaked. I mean, great place to kill a female walking alone on a trail. I didn't see another human on this initial leg, not one. But I did stop to catch my breath and snap a few pics of the amazing color wheel of trillium. Purple, pink, white - so astonishing in their diversity. 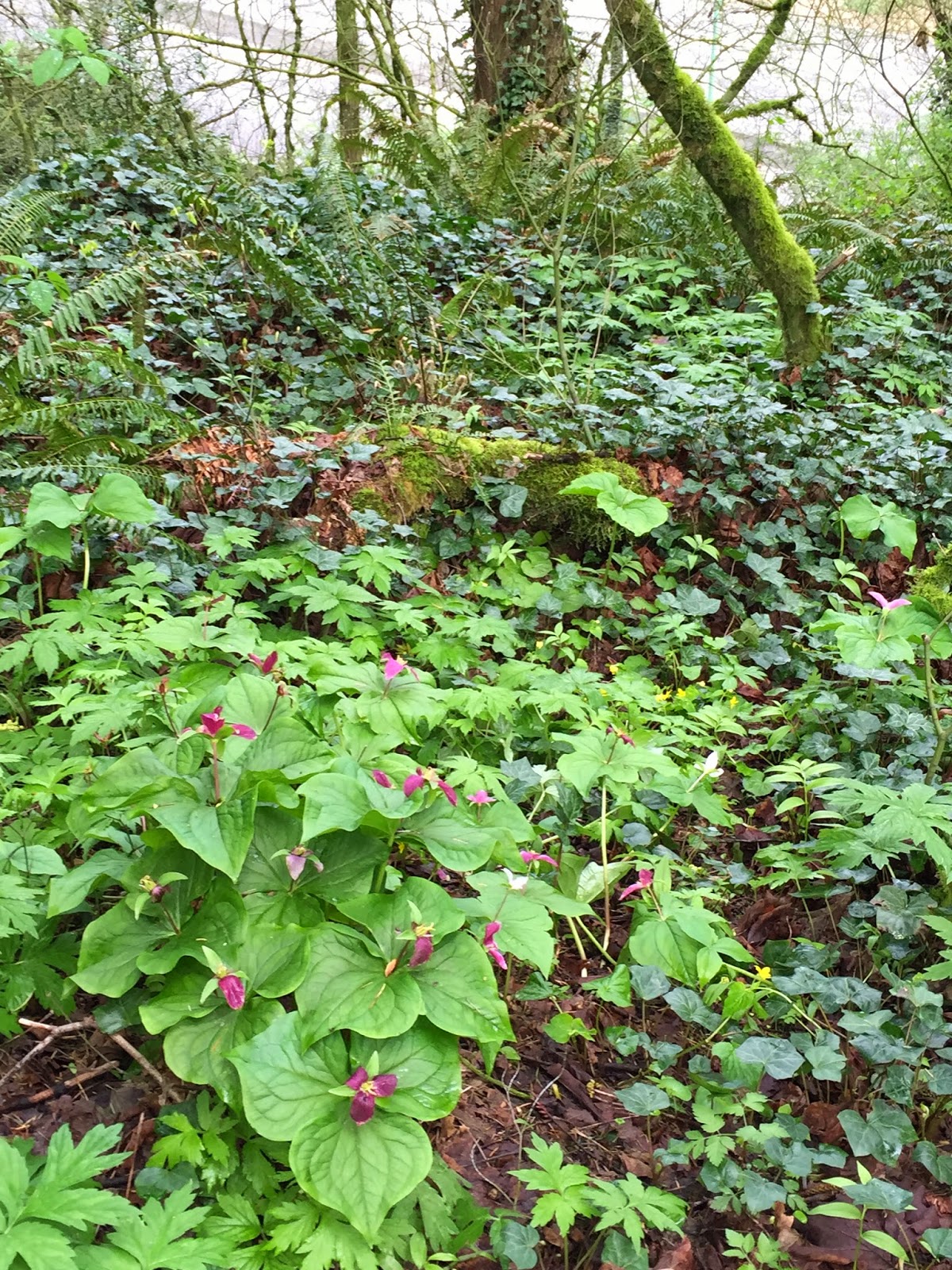 You get spit out on an intersection that's part of my daily travel (My friend Molly refers to this crossroads as Gas & God, a Shell station across from a Catholic School/Church). From here, you walk along the road a bit before connecting with the forest trail again - and then it's another uphill slog to the tippy-top. 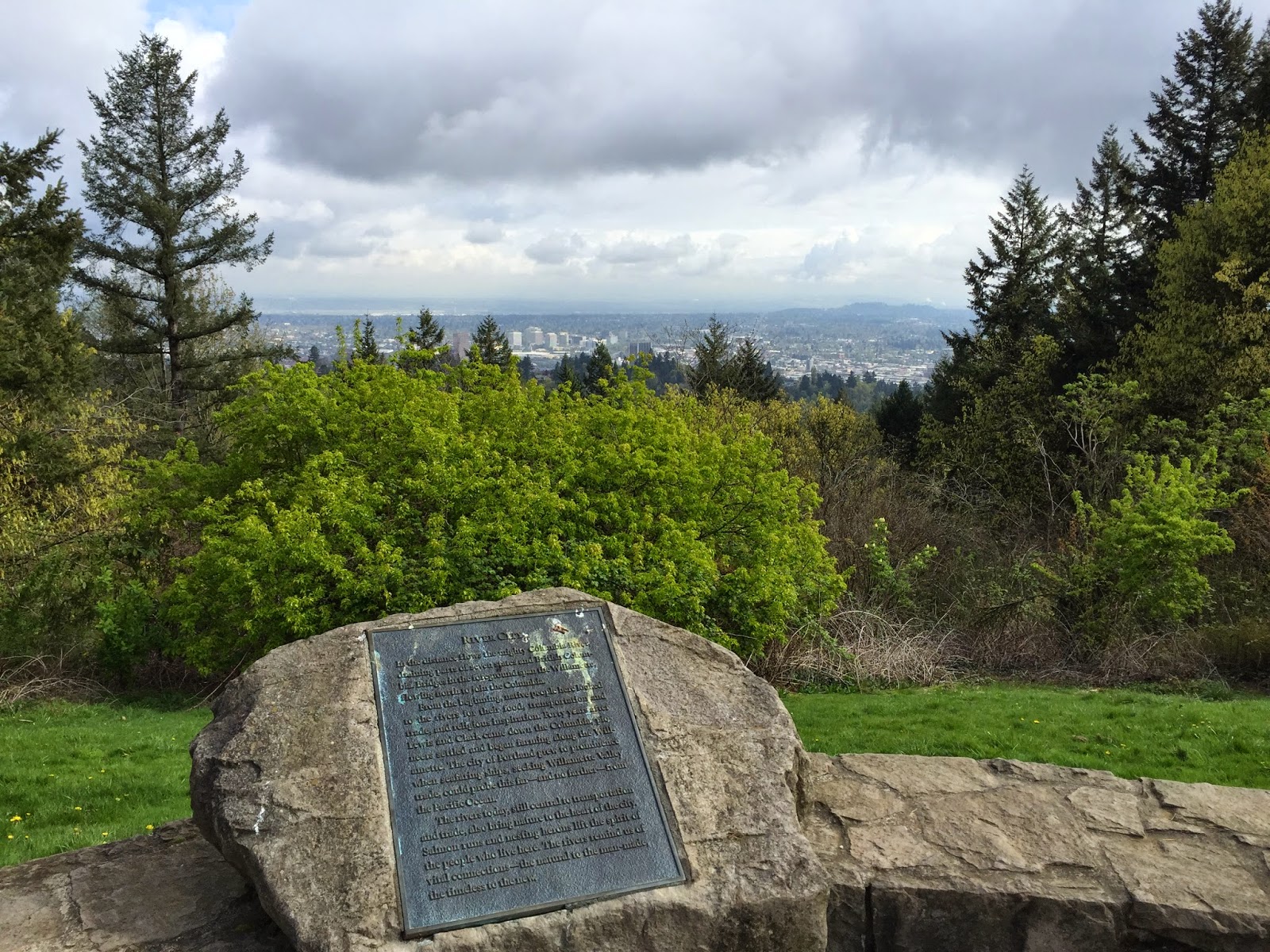 Council Crest was gray today. Not much of a view (meaning - no Hood, no St. Helen's). I should say here that I was somewhat underdressed, but wanted to travel light. I knew the temp would climb a bit before I was done, and I hate having to tie my outerwear around me when it gets too warm. It was right about here where My fingers finally got warm though. 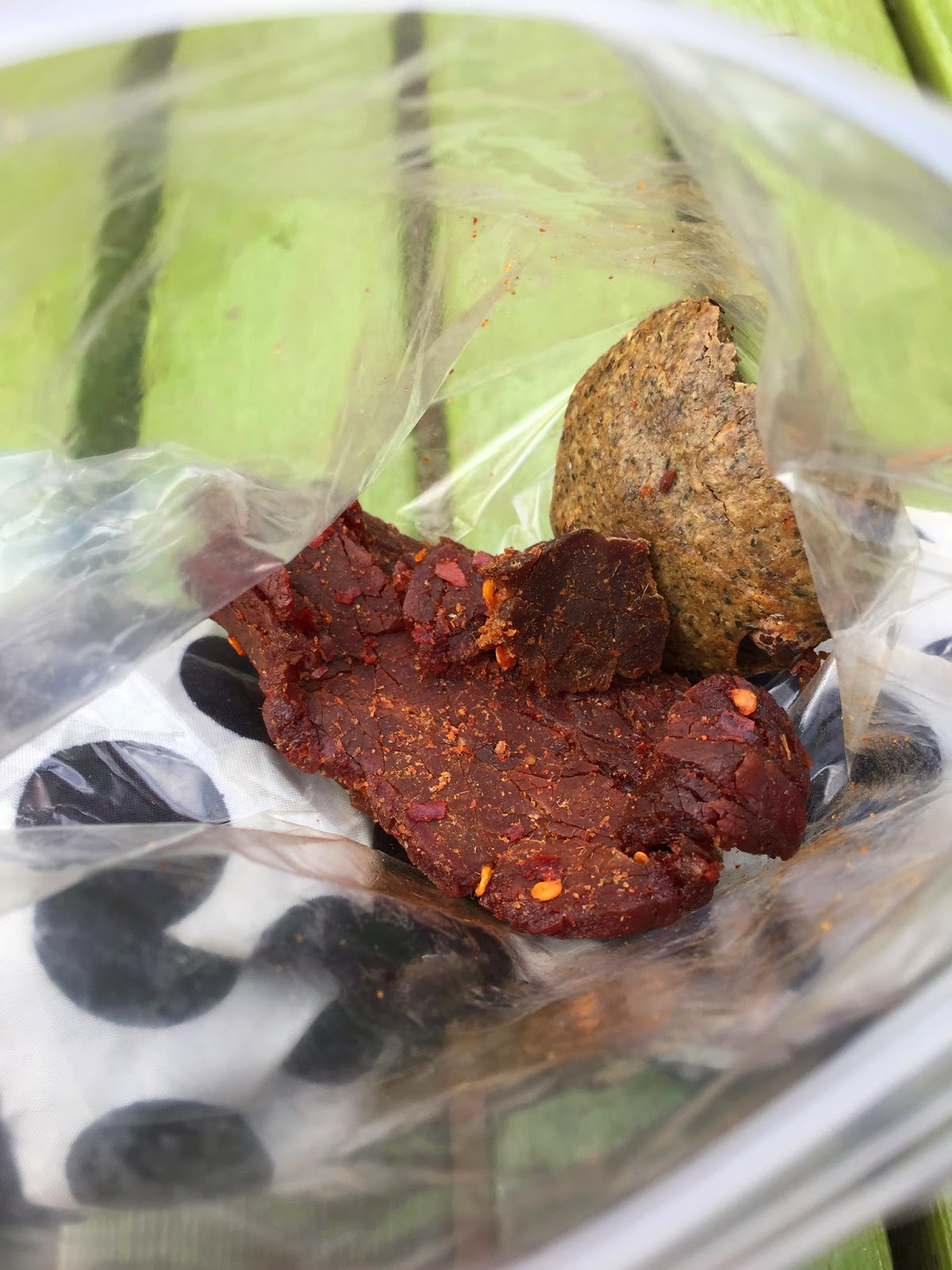 Then, after indulging in the bit of jerky I packed, I began the epic descent. Which was quite steep, and, because it's been raining, was somewhat perilous mud-wise. This was where I came up with some potential backstory for my supporting characters. This playground in the woods? A common Portland scene: ingenuity and natural resources combining to create this sort of Paleo kid space. 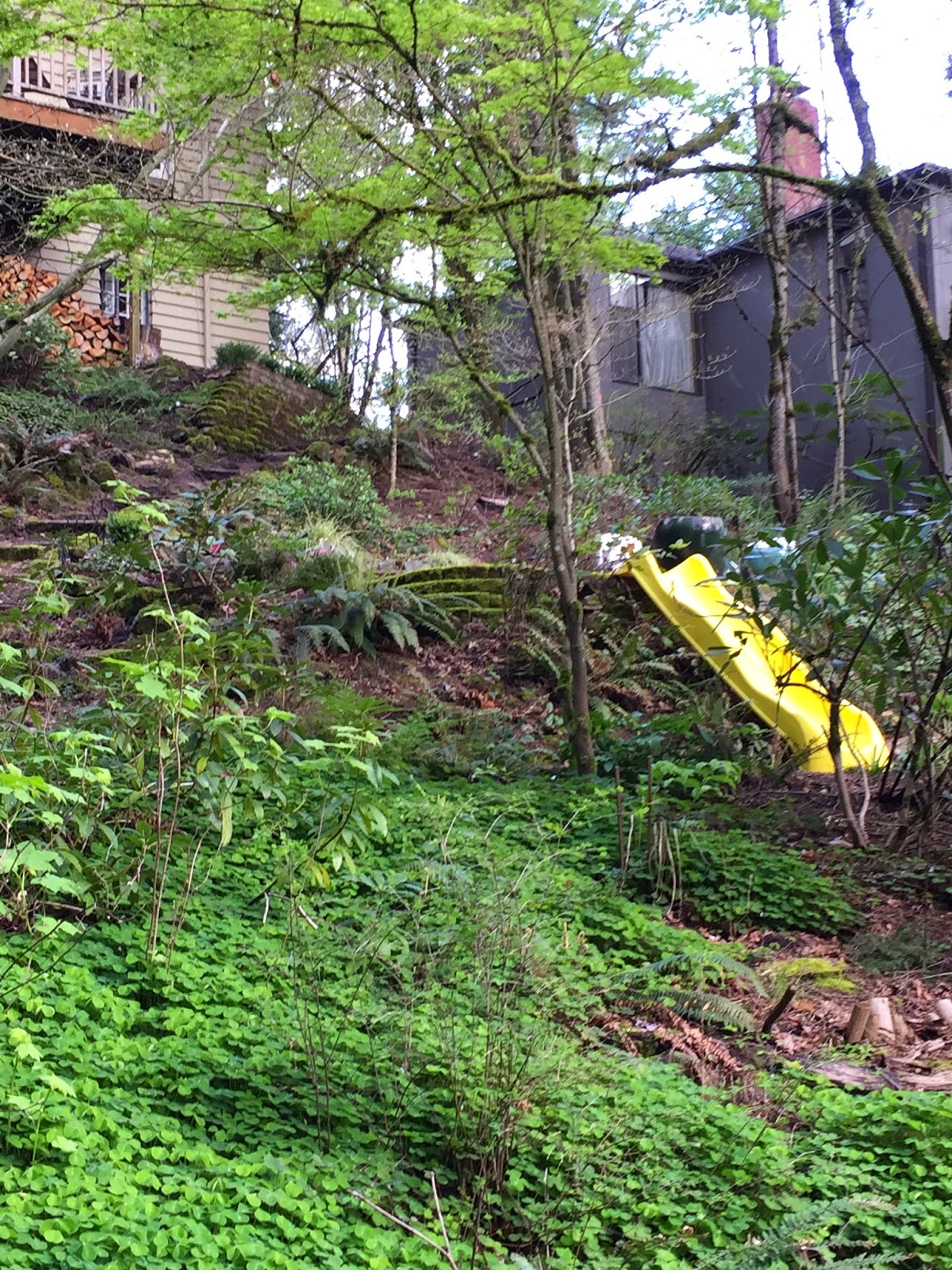 Down, down, down I ventured. Arriving at a part of a trail where I could have slogged back up hill to take the tram down to the waterfront, and then the streetcar. Instead, I decided to hoof it into town - I had a goal of reaching the Fox Theater by 12:45 to see Woman in Gold (which deserves its own blog post, because I had a strong reaction to it - very different from the meh reviews due to my personal history with a similar family saga).

All in all, this day was five star.

What did you do today?
Posted by Suzy Vitello at 10:02 PM

Email ThisBlogThis!Share to TwitterShare to FacebookShare to Pinterest
Labels: 4-T, trail-walking in Portland, Woman in Gold