One of the unexpected pleasures in playing God is when you discover two of your characters hate each other. It’s particularly satisfying when both characters are strong, articulate and quirky. My Grandmother character picks fights with one of her son-in-laws—a dentist. Their mutual animosity will have to culminate in something, or shift to alliance, or something, but for now, I’m having a blast engaging in snappy, cutting dialogue.

A peaceful troublemaker’s got to get her jollies somewhere, after all.
Posted by Suzy Vitello at 9:55 AM No comments: 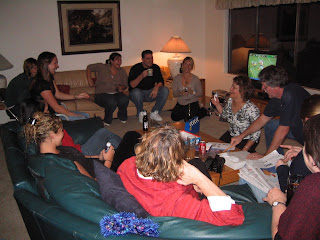 One of the best and worst things about having a full life is the quality of interruption. The hours spent mired in character, plot, research, tension and the world of fiction can be just as blissful as they are frustrating. For anything of note to happen on the page, sustained concentration is not only prescriptive, it’s imperative. But it’s hard. And one of the difficult elements has to do with emotional investment.

I was trying to explain this in the post-Thanksgiving drive home yesterday—the tendency to become invested in character to the degree that a writer, rather than being elated at the end of a manuscript, might actually become depressed. The same way a person might lament the end of a romance or other significant relationship, ending a journey with a character can be a let down.

On the drive home, my boyfriend referenced the main character in Stephen King’s “Misery” as an example of a writer who celebrates the completion of a manuscript with ritual, champagne and satisfaction.

I think the intention of the reference was to offer some sort of a carrot because I have been remiss in my daily word count. You know, the, “When you finish you can celebrate…won’t that be great,” sort of cheering squad encouragement. Bless his sweet little heart.

And because I’m such a bad girlfriend I didn’t take the bait (offered up as it was with such loving encouragement). No, I played the dark artist card. The, “What makes you think it’s a happy moment, finishing a book?” sour grapes retort.

Was I being defensive or honest? Hm.

No doubt, sinking into the heartbreak of invented characters costs. You examine the particular nature of pain, you’re looking into your own dark place. That’s what makes, IMHO, a satisfying read. An honest, accessible, real portrayal of the human condition.

Nothing gets me snottier than evoking the success of genre fiction.

But back to the question at hand. The defensive versus honest one, I mean. Give me a corner of a room, my computer and the absence of distraction and then offer the counter to that: friends, family, alcohol, my boyfriend and a hot tub, a Scrabble board and a ball game booming in the background, the typical expansive Thanksgiving weekend. Which one looks more attractive?

Fuck the broken heart. Right?
Posted by Suzy Vitello at 10:43 AM 5 comments:

Nothing slows me down like research. The trick with embedding information when you, as the writer, are not the source of the information, is all about how you assert your authority. How you appropriate what you just learned, making it sound as though you've known it a long time.

I backed myself into a situation where my narrator feels responsible for her little sister's childhood accident which happened on her watch. A fishhook snagged her sister in the eye, leaving her cornea lacerated and rendering her blind in that eye. This pivotal situation informs a lot of subsequent choices, including her decision not to have children. The narrator ultimately becomes a scientist, obsessing over cause-and-effect, studying eye trauma as she reinvents possible outcomes. On the page this looks like expertise (or, I hope it does):

There are four conventional ways to remove a fishhook. Of those there are two that typically result in minimal tissue damage. In the first, the retrograde method, the remover applies downward pressure to the shank of the hook, then backs it out along the point of entry. Not the best choice for eye penetration and a hysterical child, as it turns out. The second popular and less invasive method is called the string-yank technique. Picture it; you’ll be correct.

Method number three involves tools. In the needle cover technique a skilled practitioner presses an 18-gauge needle into the site, and then extracts both the fishhook and the needle. Option four was the one used to extract the fishhook from Cherry’s eye. But first they had to get her to stop grabbing at the shank and filleting her ocular tissue.

The section goes on to describe what happened immediately following the accident, and then visits the clinical particulars that ensue. It's all pretty scary to me, because I feel sometimes that I'm inviting mayhem into my subconscious. Once I wrote about a septic tank going awry, and the very next week my septic tank tanked. With an overly active little boy in my house, I hesitate to detail childhood trauma and give any energy to the trickster, who, in my superstitious mind, is just waiting for a chance to get his claws around the fates.

Yep, part of me is scolding me right now for being so dashboard Jesus about this, but the other part of me wants to fog out my computer with burning sage. The dark place, the scary place---keep it the hell away!

Chelsea. Take Chelsea Cain. She spends an awful lot of time writing about a serial killer. Chuck Palahniuk, he regularly visits the minds of terrorists, rapists and vengeful pugilists. All the good writers of my acquaintance dally in the "what if" of the dark side. I just finished Tom Perrotta's "Little Children." A marvelous romp through suburban decadence, deftly written with pathos, humor and grisly detail.

Even though it's important from a characterization perspective, the eye scene is really an aside--what I'm writing to avoid the scarier scene which involves the narrator's beloved cousin dying a cancer death. The swimming upstream part of this book is beginning. I doubt I'll be able to swim at a rate of 1200 words per day against that current.
Posted by Suzy Vitello at 5:13 PM 2 comments: 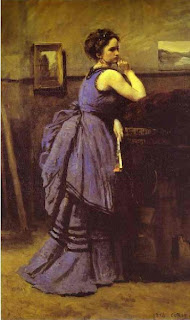 I'm working on getting down the tone of longing and regret in this backstory section of chapter seven. The narrator's broken heart and downtrodden spirit. Her unique brand of ennui--without having it sound whiny.

I'm trying to dredge up some of the late October melancholy I felt in Paris, and leverage it to this end. My narrator, Frances, is a devotee of the masters. She likes herself a good da Vinci now and again. The occasional Raphael. Loves, loves, loves Camille Corot, especially the Woman in Blue posted above.

The hard, but extremely rewarding, aspect of research is trying to figure out a way in, once you've discovered something that resonates. Blending resonance with metaphor in a way that isn't contrived.

It takes concentration and faith, and a lot of time in the zone.
Posted by Suzy Vitello at 5:13 PM No comments:

Since coming back from Paris I haven't had much time to write my 1200 words a day. Work piled up in my absence and I'm lucky if I save enough time for a proper inhale. I have been working on The Secret to Love tho. Really, I have. And, best, is that I've developed a whole new set of characteristics for Fifi (Frances), my narrator.

She's into art, all-of-a-sudden. What a surprise!

Another weird thing since returning state-side. I can't seem to get out of the French blogger template! I am now tapping underneath directives like Créer and Titre and Publier le Message.

More soon. I hope.
Posted by Suzy Vitello at 5:15 PM No comments: 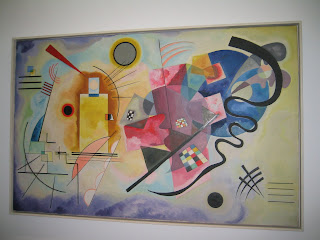 I've been in Paris all week, writing a bit, but mainly soaking it up.Suffice it to say, I'll have much to report when once again stateside. Meanwhile, enjoy the Kudinski!
Posted by Suzy Vitello at 12:25 PM No comments: