show me where it says that

I've had my current Samsung cell phone for nearly 6 months, so naturally, it's broken. Or nearly, anyway. Actually, it's in great shape if I don't want whoever's on the other end to hear what I'm saying. So I did what I always do when one of my family plan cell phones break. I played upgrade leapfrog on my $225 a month AT&T plan which includes my phone number as well as Sam's and Maggie's.

I wanted a BlackBerry. That was my first mistake. Well, no, actually, going to Radio Shack would have been mistake numero uno. "I want to upgrade to a BlackBerry Pearl," I told the customer service man at the RadioShack. Chelsea Cain has a BlackBerry Pearl, and she'd shown me the features and explained how easy the user interface is, and because I have a bit of the dreaded late adopter stupidness going on, easy user interfaces are crucial.

The customer service man was friendly enough. Especially while engrossed in a nonstop conversation with his colleagues who all seemed to be experiencing a lull in their need to provide service. Halfway through his servicing of me, he slid out the most noxious SBD ever. That really grossed me out, especially because at the time I was leaning over the counter to correct the zipcode error he'd affixed to my address.

After 45 minutes or so, my free BlackBerry was ordered, and supposedly I would receive it in one business day. All I had to do was pay a $25 activation fee and sign up for another 2 years with AT&T. I mean Cingular. No, wait, make that AT&T.

A queue of emails awaited me once back at my computer:

So I studied the paperwork with the guy's sign-in information and noticed that the young man with the horrible gas had pushed the wrong button at the end of our time together and disallowed my eligibility. Perhaps due to my carbon monoxide/methane poisoned state, I hadn't noticed. My next mistake was to try and fix this myself, online. Which I thought I did, because the Congratulations! emails began anew and two days later a FedEx truck pulled up with my brand new BlackBerry inside.

I unpacked the phone, I put in my chip, and, voila, everything worked. I was quite happy. Until I got the $170 bill for my NEW phone service from AT&T. So I called AT&T and asked them who authorized this new service with a 333 prefix sitting benext to the part that said I needed to pay 170 extra dollars, above and beyond my usual family plan of $225. A clusterfuck ensued. It involved a long conversation and a subsequent phone call to the third party "equipment" people at somethingorotherwire.com. That didn't go well either. I felt a tad racist asking the offshore Customer Service guy to repeat his name and the name of his company five times. And even more racist when I asked him to slow down and enunciate.

My friend Laura coined these halls-and-mirrors phone calls "Show me where it says that" calls, after one particular testy bill dispute call with AT&T in which she was asking them to reveal where in the contract it says "only to other AT&T" customers after the "unlimited texting" option she checked off when adding her teenaged son to the plan.

The upshot is this: I have a BlackBerry phone. I have the chip from my regular plan's phone number. I have a plan--my original plan, not stretched into another two years of crappy service. But AT&T is now telling me that I must somehow return the BlackBerry in its original packaging to the third party vendor who was unable, when I called him, to reveal the address to which I was to send said "equipment." I must return the 3rd party BlackBerry so I can then buy a new BlackBerry from AT&T for $25 (which, they tell me, is a special deal), re-sign up for an extended term on my plan, and then they can set me up with the inflated BlackBerry service on my original plan.

I don't think so. I think I'll keep the phone, and the chip, and the regular already inflated service I have with them. Who needs a phone that issues email, anyway. I really just wanted the cool little tracking ball and a better phone camera. Which I now have. Let them call me if they want something. I'll leave a greeting that says, "If you want to speak to Suzy, please press…" and then not give them the call to action number. Maybe I'll even ask them to take part in a customer service survey after they speak with me, for quality assurance purposes. 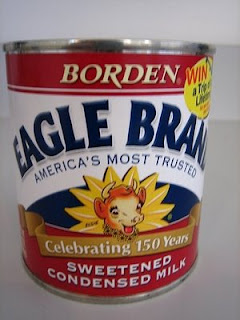 Okay, I admit it…I'm a closet sweetened condensed milk eater. I'm not so sure I'd call it comfort food. It's more like neurosis food. When I'm super busy and preoccupied and don't breathe right or stay in the moment or inhabit my body as I'm flying through my day, I get a powerful sweet tooth. That fancy cow with the necklace of daisies on the little tin can. That's all I want.

Take the leftover coffee from your morning carafe, heat a tablespoon of condensed milk in the microwave for 12 seconds, and then stir it into the coffee. Add three ice cubes—or, better yet, add a heaping scoop (or three) of Sharon's All Natural Coconut Sorbet.

Can you tell my boyfriend's out of town?

Okay. So tonight I'm going to write the chapter about the rhesus macaques and their mating rituals and somehow metaphorically tie it into Frances's relationship with her philandering feng shui practitioner husband. Or maybe I'll finish that short story that I'm supposed to have sent to Kevin Sampsell already for the Portland Noir anthology.

Maybe I'll pull an all-nighter, like back in my college days.

Posted by Suzy Vitello at 5:18 PM No comments:

could I be any busier?

On the day job front, I'm writing text for a telecom company, an IT company, a salad toppings company, a Friends of the Library org, an environmental trust, a yoga studio, a Pilates studio, as well as occasional editing jobs that have been trickling my way.

Tasks big and small: have a ginormous French drain trench in my back yard with plans to make flagstone-paths over it, tomorrow is the "laurel hedge trim," an annual event with the neighbors that involves shaving three feet off of our zealously fecund dividing bush, Kirk goes to bio camp on the McKenzie tomorrow for two five-day stints, my daughters stolen-recovered car has been fixed and sterilized, my son's oil-burner still sits at the shop unable to start, I have to mow the lawn.

On the physical location front, an extremely cool thing happened yesterday (besides that it happened to be my SO's birthday AND the summer solstice): long-time writing pal and gallery owner Erin Leonard is going to rent me an office in her new gallery in NW Portland! I couldn't have lucked out more, given that Laura is moving out-of-state. We'll be able to continue to base our business in Portland, and I will have access to a very affordable work space and a conference room right down the street from where I currently hang a shingle!

In other news—getting geared up for Bread Loaf in August (okay, okay, shouldn't that mean I'm pumping out pages???), Carson comes back from the desert tomorrow, my sister is coming to visit at the end of the week, we're doing a sibling road trip down to mom's in San Diego (complete with Sea World and Disneyland stops), and Kirk and his son are in the final month of training for the World Championship Dragon Boat races in Malaysia.

Oh, and btw, I just got a BlackBerry and I'm drowning in its learning curve. I thought these phones were supposed to be smart! Is it time for bed yet?

Posted by Suzy Vitello at 10:03 AM No comments:

the suicide squeeze of motherhood

This last week has been murder. The best way to describe it is in baseball terms. Kirk explained to me last night what a suicide squeeze is—when a player on third base has to count on his legs, and the perfection of his teammate's sacrifice bunt to get him home. Apparently the Mariners did something like this yesterday in the 10th inning and it paid off. The thing about a successful suicide squeeze is that is depends largely on factors beyond one's control.

Right now, I feel very much like someone on third base with high stakes and lots riding on my potential sprint towards home. All I want to do is go back to my dugout with a big smile on my face, but there's a lot of screaming and yelling and people counting on me executing my next move flawlessly. Or so I project.

This week both of my kids' cars were involved in some sort of crisis and/or brokenness. My son's car blew a seal inviting oil to coat his engine, while my daughter's car got stolen, inviting a merry band of drug addicts to use it as an ashtray. My phone cuts out for no reason. I think I have a fever. I have a pile of bills a mile high. My business partner is moving away. I think I may have gotten salmonella from the bad tomatoes that found their way to the produce shelves. My little boy has had hiccups all afternoon. Is that something I should be concerned about?

I'm down to one working light bulb in a light fixture I hate. I need a new blade on my lawn mower. My car picked up a screw and a weird light went on on my dash (thank God for Les Schwab). I've been popping ibuprofen all day. Isn't that bad for my liver? I'm supposed to pose in a tank top tomorrow for a summer catalog and it's barely 56 degrees out. My cat is drooling on me. My little boy is playing an annoying game on his DS next to me here in bed. Today was his last day of school. What are the symptoms of salmonella poisoning? I had to take gross junkie paraphernalia out of my daughter's car because she was freaking out. I paid the impound lot $175 to get the stolen, dented, stinky car back. I'm pretty sure I have a fever.

I took my son's car to the guy who fixed it last time, he charged me $257 and then it wouldn't start, so I took my daughter's stinky car with shards of broken cd all around the floorboards back to my home, and then to the other fixit shop this morning, and then I took the bus home. Which was good. Reducing my carbon footprint and all that. I took my son and his friend to the skatepark after school today to celebrate their last day of school. It actually didn't rain until we were done. Another good thing. My daughter came over (on the bus) to forage through some art supplies to try and recreate a project that was stolen along with her car (a list of items that includes her $400 glasses, her team's rugby uniforms and her asthma meds, etc). My little son still has the hiccups. My big son got kicked in the head last weekend in a soccer game and was dizzy for 48 hours. His car is still broken and at the first fixit shop. I'm exhausted.

But. I just sent my manuscript excerpt to Bread Loaf. I'm going to Bread Loaf in August! I hope I'm over my salmonella poisoning by then.

Posted by Suzy Vitello at 8:47 PM No comments: