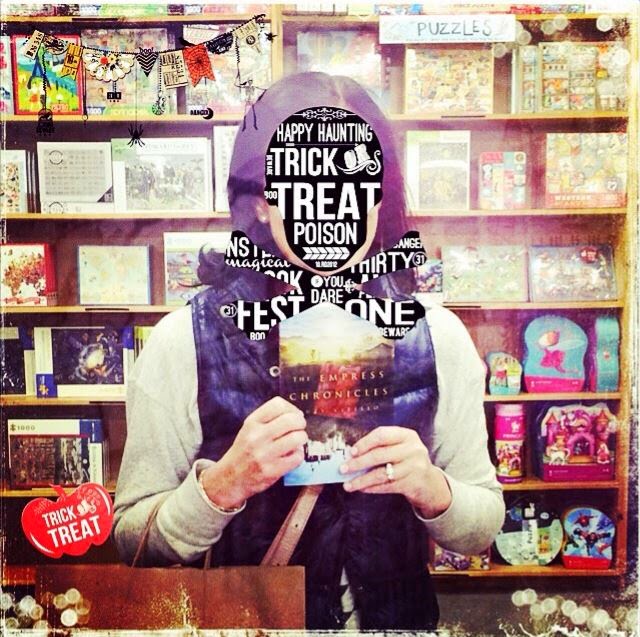 You guys, I've got a little promotion going on this week to celebrate the blog tour for The Empress Chronicles, and to add to my collection of memorabilia.

You don't HAVE to have a copy of my book (though, I'd love it if you did). Only an imagination and the spirit of whimsy. Whimsy's good, right?

So here's the deal: take a halloweenish type of picture that is YOUR interpretation of #EmpressHalloween. If you're on any of the sites: Instragram, Facebook, Twitter, Pinterest, tag me , or just use the hashtag #EmpressHalloween, or send me the pic to post socially. 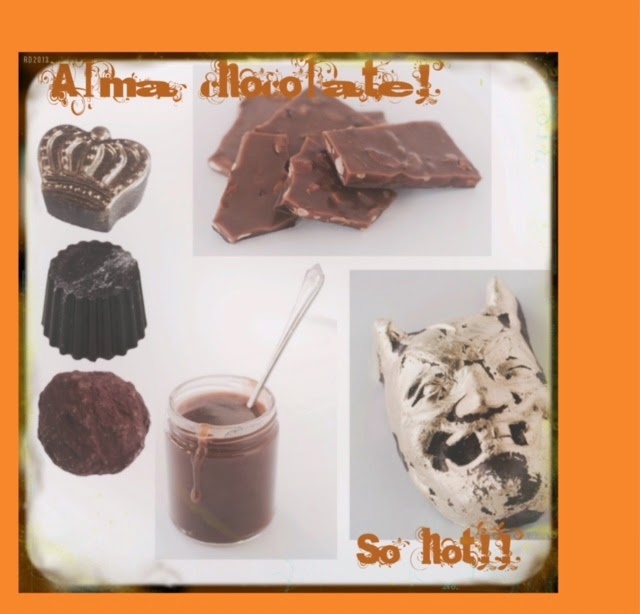 I'm going to randomly choose a photo at 4:00 pm Friday, Oct. 31st, and the owner of that picture will win a spicy array of confections from Alma Chocolates. (I have to keep this contest to U.S., unfortunately, because of the shipping regulations.)

Love to you all, and get me your pics! Any and all!
p.s. - I'm also checking the blog post comments sections every day, as well, so if you leave an exceptional comment on one of the blogs, I'll see that too and put it in the running.
Posted by Suzy Vitello at 2:32 PM 2 comments:


I read this yesterday, mulled it over, and I feel a correlative coming on. Ready? So.

Once upon a time, I moved into a heat-less, two-bedroom, barely one-bathroom farmhouse with my partner and two small children even though I’m a comfort-loving hedonist. Maybe it was (probably, it was) due to a lowly guilty feeling I’d carried around since childhood – my Oma’s voice in my ear screeching “Duty! Duty! Duty!”

In any case, the interment lasted just shy of three years. We moved out during a record cold-snap, a week before the epic Oregon floods of ’96. Yes, friends, it was the Gulag.

But the first several months of that experiment were accompanied by a sort of runner’s high brought on by continual Aegean tasks and extreme discomfort. Scrubbing 60 years of bacon grease off the kitchen walls, for instance. And scraping inches of black, asbestos-laden adhesive from the vertical-grain fir flooring so we could grind it further with rented machinery. Oh, and the chopping of wood! The carrying of septic water! Chickens and kittens and farm dogs, all with their pratfalls and mange! Not to mention a jungle-sized garden dug into the soil above an ancient cesspool. All of this under alien power lines that scored the horizon, buzzing, hissing, begging us to play in the clover.

Bliss, I tell you.

But here’s the thing. On balance, the ever-diminishing percentage of my life spent toiling out there has given more than taken (until one of us gets diagnosed with some sort of cancer that we can trace back to the myriad carcinogen-laden activities from that time). For now, I can honestly say that not a week goes by when I don’t draw from the bare aesthetic of those years. The way my senses were heightened living closer to the bone, the earth, the peril. Half of my latest novel is set there, in fact. If a novelist’s (or memoirist’s) job is first and foremost to absorb experience, then ’93 – ’96 were the spongiest years of my whole life, and I continue to wring the nectar, drop-by-drop, onto the page.

Okay, so this whole preamble is the preface for an explanation as to what in the ever-living-fuck possessed me to sign up for an iPhone 6 +. I mean, the size and shape and fragility of it renders it useless as a carry-it-everywhere tool that you can slip into pretty much any pocket, any time. Which is the way I used my 4. On paper, I bought it for its supposedly superior photo/video stability feature (I make videos on my phone! For my books!). But after a weekend of reflection (and, after reading the afore-mentioned NYT article), I amend my impetus. My new theory is, I bought the cumbersome device as punishment. As a self-styled 12-step Program, if you will. Returning to those soft-salad days where I chose to subvert my centrally-heated luxury dwelling in a tony NW Portland neighborhood in favor of back-to-the-land endurance, I’ve tricked myself into giving up my vestigial-organ-made-by-Apple.

For instance. Yesterday afternoon, under a delightful Indian summer sky, I hiked up to a neighborhood high spot naked. And by naked, I mean, phoneless. Which, if you know me, is unheard of because I’ve become one of those constant recorders of quotidian insight. You know: getting just the right filter on a spectacular flower and posting it on social media: #OctoberRose. Which is followed by a preoccupation with how many likes it corrals and the ensuing conversations therein. A prompt for community discussion!

So, sans phone, I had to take the fucker in. Its color, its smell. Its particular juxtaposition to the light. Yup, I had to stop and smell the roses. I did! And other things, too. The sensual reality of a sunny Sunday afternoon. The two girls on their front lawn in shorts unfolding a vintage Twister game. The ruckus of a Cocker spaniel and a boxer, their dual noses sniffing the fence crack as I walked by. The disappointment of some tourists at not being able to see Mt. Hood at the top of Council Crest because clouds were forming there.

My senses were alive in a way they are not when I’m preoccupied with capturing a snapshot and living life for the soundbite. Oh, sure, I’m blogging about this, so, clearly, I was still mining my adventure for its artistic merit. But, my tool is language. It’s always been language. I am not a visual artist, and I think my pocket-handy device had me believing otherwise.

Right now, I’m in the development phase of the next Empress book, which requires me to exercise my muscle for voice and observation. Which means, I should eschew the multi-tasking in favor of more sustained and quiet being. The sexy, model-thin phone, like all divas, is useless in the pocket. The curious device has announced that it may be employed for specific tasks, but it will not be, will never be, an extension of my body the way its predecessor was. I am forced to do the heavy lifting the old-fashioned way. While I still have use of my internal hard drive.
Posted by Suzy Vitello at 10:01 AM 3 comments: