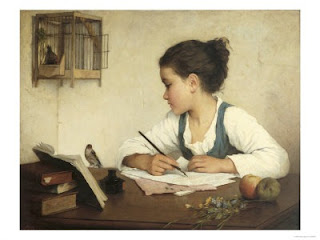 Today I spent an hour with middle schoolers in a creative writing classroom. As the mom of a 7th-grader, I wasn't going in there cold. But still. Remember that line from Anne Lamott about why she never wanted to have a girl? Seventh and eighth grade, she said. Or something like that.

The prompt was: during lunch in a school cafeteria, there are three kids. A popular kid, a shy kid, and a best friend (of either the shy OR the popular kid). The shy kid has baked some cookies and wants to give them to the popular kid. The prompt was embedded in a lesson on POV, so I asked the students to write a paragraph using the third person, and then, write the same scene choosing one of the characters as the first person narrator.

I did not specify gender, but surprise, only one of the students chose to make the shy cookie-bearer a boy.  Most of the students eagerly read their accounts of bookish, shy girls tentatively approaching brazen popular boys with the carefully baked treats. They took care to describe wild heartbeats and skinny jeans and the plucky best friends who egged them on. And the boys in this particular class? One wrote that the shy girl had offered peanut butter cookies to the boy. He was allergic to peanuts and died before the end of the paragraph. Another boy wrote a sci-fi thriller in which a character was given an assignment to have a "crush." It was an amazingly detailed, voicey 3rd person piece, and the kid, I know, will have his potboilers lining bookstore shelves before he's thirty.

Last night, to prepare for my immersion in adolescent culture, over dinner I asked my son his opinion about the prompt. And, of course, I was fishing for information about the creative writing class itself (which, by the way, even if it were the only elective at the school, my son let me know, he would never, ever darken its door). I wondered if he knew any of the students, and what they were like. He didn't. And then he offered, "But I can guarantee you there are no hot girls in that class."

"Ex-cuse me?" I hammered back. "What makes you think that, Mr. Profiler?"

"Seriously, Mom, you have to trust me on this. Hot girls don't read and they don't write."

Okay, I admit, I'd had a glass of wine and my appropriate Mother-knows-best demeanor was a bit, ahem, askew. "For your information, lots of hot girls read. And my writer's group is filled with hot, um, women."

"Yeah, well, the hot girls I know aren't into that stuff."

"Okay, who would you rather spend time with, someone interesting and engaging and funny, or someone sort of boring, but really cute?"

"To spend time with, or kiss?"

"Well, it makes a difference. If we're talking lip to lip contact, she has to be hot."

Now, my 12-year-old son is barely 85 pounds soaking wet. He's a little firecracker and, yes, he's garnered his share of freshly baked cookies (metaphorically speaking), but I still think of him as my baby--kissing? Where did that come from?

"I'll have you know that I would totally have been one of those girls signed up for Ms. Andronescu's creative writing class," I argued, while signaling the waiter for a second glass of wine. "I lived to read and write when I was your age."

He looked at me with his practiced smirk, beneath his ballcap, and he nodded. "No surprise there, Mom."

Email ThisBlogThis!Share to TwitterShare to FacebookShare to Pinterest
Labels: girls who write