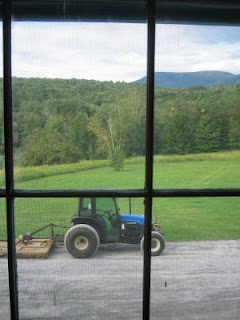 "The mosquito is the new state bird," said the Middlebury transit driver who negotiated us around the various washed out roads and bridges between Burlington and Bread Loaf. "It's rained 40 days straight."

After 24 hours here, I've concluded that Vermonters are exceptionally precise. The careful way they speak is only matched by the considered way that they listen. Most remarkable is that they don't seem to mind that the rest of the world does it differently. I was sitting up front with the driver and the other 7 passengers were in an ebullient huddle behind us, chatting quickly and with hyperbolic animation and the driver seemed genuinely pleased to be in the midst of our cacophony.

We passed a road called Hardscrabble, and I chuckled. The driver said, "You'll find that things are generally named for what they are around here." When we turned onto a road called "Burpee" I said, "So, is that named after the seed company or the tendency to produce gas."

"Well," he said, after a Vermont sized pause, "seeing as there's a sewer pipe industry here, I'd say the latter."