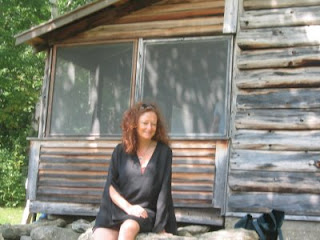 That bunch of logs back there? That's where Robert Frost spent many a miserable summer day, holed up with depression and his pen and his paper while the trees outside whistled and cracked.

I love Frost's poetry, even though I'm only familiar with a skim of his work. My grandfather, Helmut, used to read them to me from "Stopping by Woods…," the hardback with all the line sketches. It so happened that the very edition was on a shelf inside that cabin. I picked it up and got sucked into a quick hole of memory. I smelled the book, stroked its tattered cover.

Although surrounded by the very alive, vibrant Bread Loaf Conference-goers, I felt quiet and elegiac during this field trip. Sort of contemplative. Mostly dull. Earlier today I got an email inviting me to the memorial service of a man whose death came as a surprise to me. The very colorful Patrick McAuliffe, client and friend, a man who'd once hired me to help him write his memoir—the unsinkable, or so I thought, Patrick, was dead. Robert Frost, dead. My grandfather, Helmut, also dead.

A local Frost scholar, Jay Parini, gave a talk on the history of the cabin and the lower house, which make up what's known in these parts as the Homer Noble Farm. As a Pofessor of English at Middlebury College, Parini gives this docent lecture a lot. But he was anything but rote in his delivery. He made Frost a real man as he described his struggles, background and allegiance to the earth. Of particular color was a recent punishment he, Parini, was asked to carry out. Seems a group of high school kids broke into the lower house and wrought havoc over the winter, downing huge quantities of beer while trashing the historic home. In lieu of jail, the kids were sentenced to Frost seminars taught by Parini, where they had an object lesson in what "The Road Not Taken" might mean.

This is the lie-low day at Bread Loaf. Catch up on rest, reading and writing. For me, it's a sad day. I'm homesick. I miss my sweetheart and my children. And I will miss the occasional enthusiastic, unintelligible phone call from my good friend Pat.