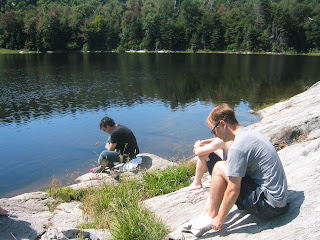 Fabulous Bread Loaf day in every way. Hiked up to a wonderful lake, took a quick plunge and felt like a college student. I guess this is one of the great take-aways—the return to coed days of yore. And this time, I got to go to one of those smallish private New England colleges instead of the large, urban University I went to so many years ago.

Aside from the extra-curriculars, this mini immersion in writers' nirvana will linger and spread—and hopefully good work has begun to germinate already—just by osmosis.

As I mentioned last post, four of us in my writing workshop have spent time in the obscure little seaside town, setting of my book. What are the chances?

Then there was the wedding ring thing that happened today. One of our party was glancing down at the lake from a perch on the slick rocks above it when he noticed a man's wedding ring slightly submerged, six inches or so, in the lake. I was nearby, so I scooped it up, and handed it to him. We speculated as to its story. Was it left on a rock? Did it fall off a finger? Was it thrown into the drink by a sad, separated husband? See what happens when you get a bunch of writers together?

The discoverer of the ring put it in his pocket, with the intention of handing it over to the Bread Loaf staff, putting a note up in the lodge, or the Crumb newsletter. A bit presumptuous maybe, given that this wasn't Lake Bread Loaf, after all. Other Vermonters occasionally swim here too. But, never the less, it seemed likely that the owner might have some association with the college.

Fast forward a few hours. I'm at the Gala cocktail party sucking down a Bloody Mary, and Canadian Ken (my name for him to distinguish him from Portland Ken), inquires about my day. "It was terrific," I told him, "I went to the lake."

"Oh," he said. And then, in an ironic tone he asked if I happened to see something round and shiny there.

"I went swimming and I lost my wedding ring."

What are the chances?

Now, that's one little coincidence, but an even bigger one is that the guy who found his ring is also the guy who answered the Bread Loaf trivia question posed on the first day: find the book and the page number of the following passage, trivia question. And he managed to find the answer to that trivia question while paging through Canadian Ken's book. So, as was pointed out, those guys will be forever cosmically connected.

It's just a magic place.