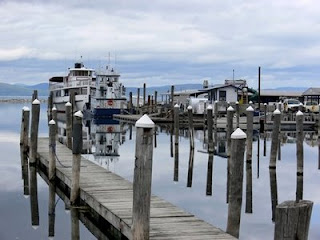 The airport in Burlington, VT is in the middle of a neighborhood. Weird. Like PDX, but smaller, quainter. I'm at the Holiday Inn for the evening after a day of uneventful air travel. Uneventful except for the last few minutes of flight over Vermont when turbulence sucked the plane down freakishly causing many a traveler to scream. They were the short sort of screams, the type muttered without thought and quickly rescinded. The turbo prop carrier in which we bounced immediately corrected itself after all, and, plus, the plane wasn't about to go down full as it was with forthright New Englanders.

Best was I caught up on all my New Yorkers which had been brimming the bill basket since April. I read a great TC Boyle story and an even better essay by Saunders. I'm priming the pump. Yes I am.

Now I'll pop into the hotel restaurant for a bite with a brand new colleague and friend, Ken, another writer-ambassador from Portland. We have to set up a game plan for west coast solidarity in the face of all the greatness that awaits.

Oh, and good news: neither the bottle of Tanqueray nor my French press broke en route!