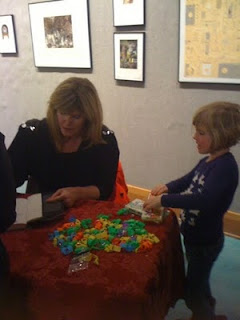 Last night my family and I popped over to Powell's Books to hear Chelsea Cain read from her newly released "The Night Season." Like any proud extended family midwife type, I marveled at her ability to convey the mixture of emotions, excitement, exhaustion and presence that accompanies the launch of a book. (Here she is signing the umpteenth book of the night with her daughter dutifully handing out the swag.)

This is the fourth book in the Gretchen Lowell-Archie Sheridan-Susan Ward series (formerly known as the "Heartsick" series), and oddly, it seems like just three weeks ago that Chelsea announced to our writing group, "I'm thinking of writing a cheesy thriller."

In a world overflowing with would-be novelists and cliches of folks who dream of best-selling authordom, her claim never left a doubt in our minds. Like many of the writers in our group, Chelsea has that extraordinary combination of intelligence, tenacity, talent and will. The quadruple storm of qualities that allows the publishing industry to persevere in the face of economic ruin, technological explosion and a generation of kids who often won't read anything longer than a tweet.

As she said on the podium last night when asked how long she planned on doing this, "Until nobody shows up at Powell's." In other words, forever.
Posted by Suzy Vitello at 8:52 AM