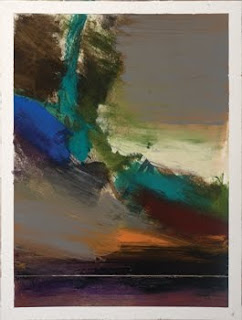 One of the top benefits of living a pastiche work life is that it lends itself to the unexpected. Now, granted, that's not everyone's cup of tea, but I'm all about the surprises. A couple of years ago one such serendipitous adventure flew into my window. An artist by the name of Ted Katz, whose art is featured to the left.

Ted was writing a book, and he was looking for an editor to help him organize his "are they essays? Stories? Where do I go with them?"

Ted loaded me up with his binders: pieces he'd written over the years, sketches, interspersed with his fabulous pictures. We met, mapped, meandered. He had a title: The Studio Within.

Ted has been painting and teaching in one form or another for 50 years or so, and in that time he'd amassed a portfolio and a vita that would be a lot for five men. The first time we met, he spoke about students who would be awe-struck upon seeing his current studio: a clean-well-lit, glorious space built onto the mid-century house he shares with his partner. This frustrated him. "Most of my work was created on a card table sectioned from my living space by a shower curtain," he said. And then, emphatically, pointing to his solar plexus: "It comes from here. This is where the studio is."

Now, nearly two years later, Ted has finished and published his book. The Studio Within is a collection of 40 lyrical pieces-- personal essays that venture into the heart of the artist's journey. It's funny, heartbreaking, full of voice and life, and most importantly, the essence of Ted.

Today, Ted invited me on his collector's tour--a preview of his upcoming show at Butters Gallery. The paintings he unveiled (the one pictured above is part of it), celebrate the theme "edges," and by way of introduction, Ted wrote a new essay that explores the relationship between a painting and its viewer. In the same way that his paintings "are responses to forms created by light and energy, and the edges formed by their noises and silences," the relationship formed between audience and picture is a response to a particular exchange of energy, much of it silent. Personal.

I love that Ted is acknowledging and calling out this temple within. It's one of the most wondrous qualities of humanity, the occasion to linger in the space where one thing meets another. Like the happy accident of meeting and working with Ted, the edge between the "you" and the "me" of art is as mysterious as is it mercurial, and summed up well by the conclusion of Ted's "edges" essay, a lovely quotation by William Carlos Williams:

"Unless there is a new mind there cannot be a new line, the old will go on repeating itself with recurring deadliness: without invention nothing lies under the witch-hazel bush."