once a soccer mom... 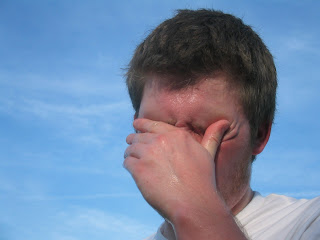 So yesterday afternoon, in 100 degree weather, I embarked on the 100 mile drive south to U of O to watch my oldest child kick a soccer ball. And, to upgrade his clunker with an older, higher mileage, but safer one. A safer clunker without, I must add, air conditioning.

I had the little guy with me as co-pilot, and after myriad sweaty stoppages in rush hour Friday afternoon I-5 traffic (made worse by the litter of broken down, burnt engine, smoking hood vehicle detritus along the side of the interstate), I arrived at the field in time for the second half of Sam's team's game.

Carson and I lugged the Gatorade-filled cooler to the field and cheered on the Thundercats (a name usurped from the glory days of high school--for a team that included many of the erstwhile team's members--a deeply satisfying terminal soccer mom moment). I missed Sam's first half goals (they won 4-1!), but got there in time to watch him suffer in the heat--squinting, sweating, red-in-the-face. Like many native, or nearly native, Oregonians, Sam's not a big fan of the sun.

We followed the game with a trip to a brew pub for dinner, where I found myself trying to get used to the fact that I have a kid old enough to say, boldly and legally, "I need a beer!" 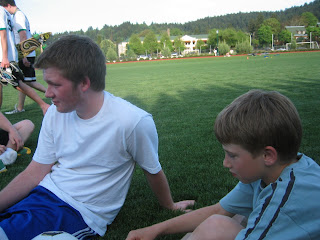 Watching my two boys side-by-each in the darkened McMenamins tavern it's hard to miss the fraternal look. Both are blond, blue-eyed and fair-skinned. True to phenotype, they both have my half-closed eyes stoner look, but personality-wise they come from opposite poles. Carson ordered a kid's burger with fries (as opposed to tater tots). When his meal came with tots instead he ate half of them, then summoned the waiter, pointed to his plate and said, politely, but firmly, "I think I ordered fries." After which the server scurried off to deliver same.

His make-no-waves elder brother was visibly impressed. Not only would he never have pointed out a mistaken order, he frequently goes out of his way to avoid even the appearance of disappointment. "Dude!" he said to his little brother, and then pirated half the fries.

We finished our repast and then swapped titles, cars, glove box crap (including a pair of rear view mirror breasts), and then I got to fill the old Honda with gas, buy a quart of oil and embark on the 100 miles north. The check engine light went on pretty quick, directly on the heels of the unmistakably foul smell of burning oil. Oh yeah, and the belch of gray smoke coming from the tail pipe. So much for using the air-conditioning I was looking forward to.

I'm not good with stuff like this. I tend to exclaim that I'm freaking out, even though I have a nine-year-old beside me saying, in his best I-statement, "When you say you're freaking out, it makes me feel freaked out."

Visions of the earlier car fire we witnessed filled me with worst-case-scenario dread. I pulled over, bought more oil, and got some attendant guy to muscle off the oil tank cover that was welded on due to excessive heat.

Upon restarting the car there were more smells, more sounds, more plumes of smoke. But no check engine light. We made it back to Portland in tact, and just before midnight.

It's still really, really hot outside.

I'm so glad I have a brand new Element so when Carson and I go bike-riding and skateboarding and tennis playing later today, we can look forward to interludes of not being freaked out.
Posted by Suzy Vitello at 10:55 AM