climbing on the wagon

I outdid myself this holiday season, in terms of cookie, chocolate and alcohol consumption. In my mind, I resemble the Ghost of Christmas Present in "A Christmas Carol." Everything inflamed and larger than it should be. My stomach gurgling and hurting. My skin blotchy. I picture my liver being blown up by a ball pump. And the vessels in my heart choked and lined with fat. The bad fat. You know, LDL and whatnot. I know what to do. Of course I do. I have a 80thousand dollar education from Syracuse University to prove it. A diploma somewhere in storage claiming I have a BS in dietetics. I know that fad diets are lame and losing weight fast is stupid and unsustainable, and that there is no fountain of youth. I also know better than to cram my face with peppermint patties, almond roca and figgy pudding. And yet, each year, I eat like a pig for a month, washing it all down with gin and red wine - sometimes both in one sitting. Fa la la la burp la.

It's no secret that we tend to eat three times the calories we normally do in the five weeks or so between Thanksgiving and New Year's. Booze, bon-bons, crème brûlée. Champagne, cheese, chocolate. In that cold, dark month, we Americans pile on as many calories as we do from June to October. And we exercise half as much. Wonder why we tend to feel like shit on December 30th? And guess what? We still have a week's worth of parties to attend! I'm all about The Royal We here, because, obvi - 'tis the season of the diet book. A whole shitload of them pubbed today as a matter of fact. Here are a few:

The Zero Belly Diet
The Burn: Why Your Scale is Stuck and What to Do About It
Supermarket Healthy
The DASH Diet Younger You

Of the above books, I recommend the DASH one. And it's probably my frame of reference, coming from a clinical dietetics background, but this book includes some of the latest academic information backed by actual scientific research. I'm a snob about that stuff. So shoot me. There's another book I like too - and it has a similarly unfortunate "snake oily" title: 7 Years Younger: The Anti-Aging Breakthrough Diet. I am gleaning stuff from both those books, and making my lists, checking them twice.

The thing about any prescriptive book for creative types? We have a hard time following directions. Guilty as charged. For instance, I'm not going to eat oatmeal. My loving husband does. Every single morning. I hate oatmeal. Unless you put lots and lots of butter and brown sugar in it. Period. Also, low fat cheese. What's the fucking point of low fat cheese? I say, eat half the amount of regular cheese. Plus, no way am I giving up coffee. I am giving up booze though. For a month - then adding it back in judiciously. Also, limiting sugar with a goal to wean myself off of it 90% of the time. 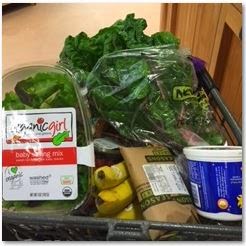 So, upstart that I am, I've developed my own version of a diet, stealing a lot from the aforementioned books. It's anti-inflamatoryish, balanced as far as the carb/protein/fat thing goes and it's between 1400 and 1500 calories, so it's reasonable. As far as writing things down? I have the apps. A really good one is My Fitness Pal, and an even better one is Fooducate. MFP is free, and the bells and whistles Fooducate one costs a few bucks a month. They're helpful to track the calories in/calories out thing, but the best way to get on the healthy eating wagon after a period of over-indulgence is to plan ahead. Buy the groceries, plan out the menus, know what you're going to eat at the start of the day.

So, guys, here's how I'm going to do it. I'm going to post my "menus" every day and my "shopping lists" once a week. Here on the blog. Staring tomorrow, New Year's Eve, until January 30th (at which point I'm off on a week long holiday with some fabulous gal pals, and yes, I will eat, drink and be merry - but hopefully, somewhat healthily, too).

Wanna join me? No pressure. Only that tight waistband.
Posted by Suzy Vitello at 6:36 PM