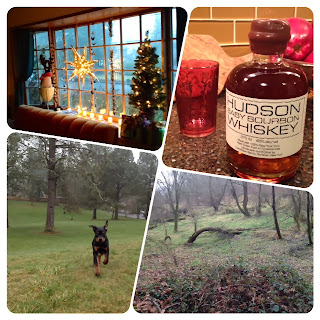 I'm approaching the holidays differently this year. Instead of the blazing fire in the hearth, I'm slow-flickering embers. Seeping. Hissing. Planning. Scheming.

Think of The Little Match Girl at the onset of visions. The Grinch after his night on the town, his enlarged heart slowing to a steady hum.

I blame the puppy, who requires me to arrange my waking hours around walks and potty training, and whose cuteness pretty much eclipses work, cooking, and certainly mundane activities like the laundry. Sometimes, all I can muster is putting her in the car and driving off to some trail somewhere where we wander through the frigid underbrush and then forget where we parked.

Also, I've been fighting a nasty cold for over a week. The sort that manufactures snot on some sort of assembly line akin to Santa's workshop, and has me walking around like a drunkard in a congestive daze. And then there's the novel which (along with Brady, Sabine, Connor, Martha and Nick) is about to hit the streets. That little debutante is screaming in my ear, demanding a designer gown with shoes dyed to match. Holidays, schmolidays, cries the novel! Get me an Irish coffee, Wench!

And speaking of Brady (that mischief-maker), I'm about to pull the trigger on a little something special for the holidays. A pre-moment to The Moment Before. Something free and good and full of holiday cheer for the twelve days of Christmas past which will be downloadable. Sorry I can't say more than that - I'm being cryptic, I know. But the holidays are filled with mysteries, yes?

Are you writing any secret something for Christmas?
Posted by Suzy Vitello at 5:37 PM

Email ThisBlogThis!Share to TwitterShare to FacebookShare to Pinterest
Labels: Christmas secrets, pre-release giveaway, The Moment Before