david and the duomo, done and dusted 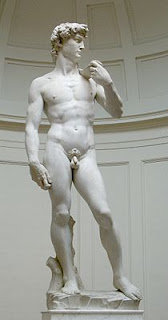 The first thing that surprised me, were his hands. I'd read the guidebook, downloaded the Rick Steves' audiotour, but still. It's hard to get beyond those paws. Phrases like, Hand of God, and Gotta hand it to him, kept assaulting me. Wouldn't want to get on the dude's bad side. Which, I guess, is the response that Michelangelo had in mind.

So, I'm standing there in awe, like everyone else, circling this iconic masterpiece, when all of a sudden there's a clunk sound next to me. A bad clunk sound. Turns out this rather large woman has just collapsed in front of the David. A small group of us start fanning our tickets and guidebooks around her. Her husband stoops down next to her and starts rummaging through her purse. An attendant grabs her legs and lifts them up. (I'd never heard of that.) It was a diabetic thing, apparently. Low blood sugar. Dehydration. Maybe a combination. After a few minutes she came to, and was dizzily guided out the door by her husband.

I'm sure it's not the first time David inspired fainting. Plus, it's August in Florence.

Still, it more than freaked me out, in that I'm-a-woman-traveling-alone sort of way. Humans are more fragile than we think. And the way those Smartcars and motorbikes zoom around the cobblestones here. And me, and my daydreamy half-attention style. Doom could easily be just around the bend. Or tainted gelato. Or a falling brick from some renovation project. 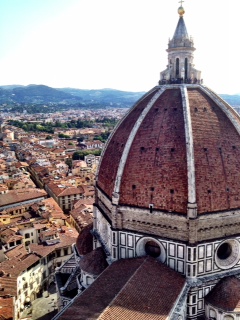 So, I did the thing I always do when I start down the doom-trail. I manned up and strode toward the Duomo, intent on climbing to the top. Unfortunately, by the time I'd finished the Accademia Gallery tour, the line to walk up those 463 steps to the dome was a winding mile long. I don't know about you, but it seemed absurd to stand in a two hour line, and then pay money to climb the world's longest staircase. So instead, I walked across the piazza to the Campanile bell tower (413 steps, no line, 10 Euro), to sweat out my anxiety.

As with most huffing and puffing adventures, the payoff did not disappoint. It was a clear, moderate morning in Florence, and the view from the top was magnificent. Plus, I got to look down at the massive Duomo line from my perch.

Have you ever had a "plan B" experience that made you feel pleasingly cocky?
Posted by Suzy Vitello at 4:42 AM