and behind door number three? 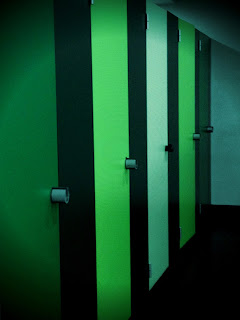 I'm in the basement of Imbarchi C in Rome, laying over for a couple of hours until my flight to Firenze, wondering how many cappuccinos I can toss back in that time and not have a heart attack.  As I type this, sitting in one of several metal chairs that dot the long hall, there's a monk all garbed out a few seats away. The tourist in me is all, "Maybe he's from the Vatican! Think he'd be up for an autograph?" But, this holy man is dressed much more in the vow of poverty style than the Pope's entourage (but, then again, we did get that new Pope who's humble, right? The one who replaced the fashion plate Pope?).

Maybe it's a sign from God, because I'm here in Italy workshopping my legacy heretical novel, Blackdirt. Maybe I just better get on my heathen knees and beg for a blessing.

Clearly, I'm a little rummy. I've slept about five broken up hours in the last two days. Ambien and all.

(Oh My God, a nun just walked up dressed in the exact same feed sack attire. Long canvas robes cinched with simple brown belts. Birkenstocks on their feet. They're sort of having it out. They seem perplexed. Their discussion is in Italian, of course, so I can't eavesdrop.  Damn it! The nun is taking out an old cell phone--pre-flip, even--and untangling the charger's cord, looking for a place to plug in. It just seems wrong, doesn't it? Monks with cell phones? Even dated ones.)

The Rome airport is a little surreal. Very gleaming and shiny. Long halls to nowhere. Poor signage (Even in the mother tongue). But it's so exotic. Fendi bags and perfume shops. Even the restroom doors (shown above) are intimidating and stylish. My only other trip to Rome, I was here about 72 hours, and I must say, it's one of my favorite cities. It's just so weird! I mean, the ruins, the mopeds, the hucksters, the holy places, the fountains, the gelati, the "everyone going home to fuck in the afternoon" thing. It's like an ant colony, constantly crawling with activity (unless it's the afternoon), and purpose that all very insidery. All so very Star Trek.

We landed amid a cloudburst. Oddly, it's rainy and crappy out this August day. Grey like Portland in February. But muggy. Ay. Well, the monk couple seems to have worked out whatever they were upset about. I think I'll fold up my laptop and people watch for a few minutes before my flight to Florence. I hope the monks are on my plane.
Posted by Suzy Vitello at 11:23 PM