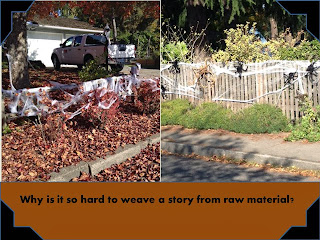 Every writer I know has a project that's been "sort of" abandoned. One that lingers in the secret closets of a hard drive, perennially discovered, ripe for dragging into the virtual recycle bin, only to be granted a last minute stay of execution in hopes that it'll reform itself, and worm its way back into the writer's favor.

I've been wrestling with such a project for two decades. Not years. Decades.

As I linger in the publication green room, queuing up book launch ideas faster than I can rip through a bag of semisweet chocolate chips, I've once again unearthed my drawer novel. (Or in my case, my Rubbermaid bin novel). To be fair, the novel does have a pretty little arc. Compelling (in my opinion) characters. It has some successful scenes and every time I venture back to it, I find myself lost in the poetry of a few of the sentences.

That said, there's a secret sauce that's just not there yet with this project. Something is missing aesthetically. It still feels like parts instead of the-sum-of-its-parts. I know, I know, that's what revision is for. Finishing touches. Grace and beauty. Turning a mess into art.

The red flag here is the length of time I've been fucking around with this thing. My writing style has shifted. My interests are different. What I wanted to say in the mid-nineties, I don't care as much about. And yet there's still this lure with this thing. The web of it trapping me for hours at a time.

What was the last thing you held onto longer than you should have? And what happened?
Posted by Suzy Vitello at 3:38 PM