After a tumultuous couple of weather and holiday-challenged weeks, most of us gathered at my house for workshop last night. Because it was the January 1st, the proverbial day of best intentions, we set aside some time to discuss our “writing resolutions.”

Around the table we went, declaring our writing and publishing goals and imperatives for 2009. 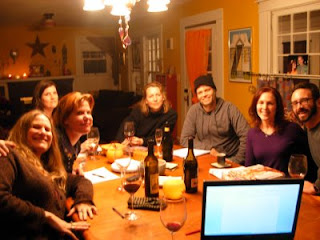 Cheryl, Jim, Diana, Chuck, myself, Lidia, Chelsea and Monica all resolved to finish various projects. And, for the most part, sell ‘em.

After our brain dump, Chuck brought up something very important. It’s his opinion that if a resolution doesn’t scare or embarrass you to some degree, you haven’t aimed high enough. You have to open the door to, “Who the hell are you to deign to declare such a thing?”, if you really want to push the boundaries.

I’ve been in workshop with some of these folks for 15–16 years now. Chuck recalled the resolution that precipitated “Fight Club,” when we were sitting around the table at Tom Spanbauer’s house. He was still unpublished, having had “Invisible Monsters” rejected, and he was fueled, rather than discouraged, by a publishing world that declared him too “outre” for the common market. He’d resolved to write and sell a book by year’s end. He claims that his declaration was met by rolled eyes. But then, during the course of conversation, I remember the other thing he resolved all those years ago. It had to do with the meta world of publishing: readers and writers and the power of language.

“I will write something that will change the book industry. I’m going to re-invent language,” he stated. “I want to bring books to a population that isn’t reading.” In retrospect, I think THAT was the object of scoffs all around. The brave statement he made that flew in the face of humility.

But, we all know how that story came out, right? Not only did Fight Club get written and published, but in the year’s that followed, due in large part to Chuck’s hard work and prescience, and a Zeitgeist that formed around his ability to speak to a demographic of non-readers, he set in motion the energy that created a meteoric cult following, and the market for the umpteen books published since.

So. My resolutions: In 2009, I will finish The Secret to Love. I will finish Sustainable Romance. I will build my platform and establish myself as an indefatigable explorer of love on the page.