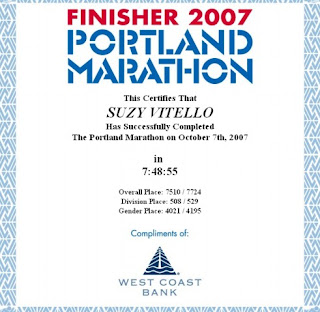 "People think I’m disciplined. It is not discipline. It is devotion. There is a great difference.”
--Luciano Pavarotti, opera singer, (1935-2007)

My hip joints hurt. My brain isn't quite working right. I have a couple quarter-sized blisters on the balls of my feet. After 26 miles and change, with inadequate training on pavement, I'm humbled. Blue-haired ladies with fanny packs stretched across their broad bottoms passed me nonchalantly. With a chip time just barely under 8 hours, I felt like a short-bus, Special Olympics kid as tenacious well-wishers cheered on my tired, gimpy ass, and bored teenagers doing community service held paper cups of Gatorade out to me those last few miles.

Kirk and I have added "walked the marathon" to our web of togetherness activities. However abashed I feel, Kirk feels more so, given that the bystander applause for the stragglers was accompanied with shouts of "You go girls!" According to the stats, he finished 345th out of 347th in his sex/age category.

I'm not minimizing the accomplishment, though. The fact is, us mt-climbing hikers were simply underprepared to walk 26.2 city miles. Training schedules are typically 5 months of gradually increased distance walks culminating with two 20-mile training walks. Our longest road training walk was 10 miles, and our longest walk in the woods was 15 miles. Our decision to join the masses of appropriately trained athletes amounts to one word: Chutzpah!

Our casual approach to marathon weekend extended beyond not really training for it. For instance, we went to a dinner party the night before and helped ourselves to substantial servings of "unfamiliar foods" (red meat), and swilled our share of alcoholic beverages, followed by a night in my daughter's downtown apt, where we may have slept three hours or so in a pull-out drawer made for a midget, not to mention a couple unmentionable and embarrassing physical maladies that befell us a few days before. (All I'll say about that is, thank God for witch-hazel.)

But, through it all: the non-training walks, the logistical scramble, the slightly late start we got on race day, all of it, we had a blast. We laughed, we christened every single stand of porta-potties, we grabbed all the free Red Bull and Gummi Bears they offered, and even considered hopping off course for a quick bagel--which we didn't do, but we did slip off to Kirk's "Shagwagen" parked a half-block off the 13 mile mark in order to change socks and apply Tiger Balm.

Other fun long-distance walking distractions included arguing about the form and function of sliding glass doors (that one got us through the ugliest wind-in-the-face section of the NW Industrial area), and planning our upcoming winter activities. We chatted the 7 hours and 49 minutes away as though we were on an extended date.

Our whole "let's do the marathon this year" plan was built on whimsy and courtship. We were devoted to the idea of it, if not the discipline required to do it right. And, let's face it, in middle age, we have to fight seriousness whenever we can. Not to say that we lacked intention--it's just that our intention was simply to do it, without thinking too much about micromanaging the preparation for it.

Kirk and I are both fairly competitive, so it was an interesting choice to sign up for a race knowing we'd end up near the bottom of the pack. But, we also share a history of allergy to "groups." Signing up for a training camp where our schedule, routes, footwear and diet would be dictated by an association left both of us cold. So we set out on our own, devising a half-assed regimen that included shit we like to do--and nothing more. Oh, the arrogance. Oh the aching legs, ass, feet and hips! But, in three days we'll be over it and on to the next thing. Or not. In the big picture, the fact that we imprinted a lasting memory while taking a long-ass walk through the bowels of Portland amid the cheering, enthusiastic masses was worth more than a stellar chip time. And, guess what? This gig is an annual event, so if we ever decide to explore the disciplined version of our little experiment, we gots another chance.
Posted by Suzy Vitello at 9:57 AM