I'll work for your love, Bruce 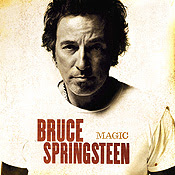 Excited to indulge the Jersey Girl in me, off I trotted to Music Millennium to purchase Bruce Springsteen's Magic, which came out today.

I wanted the actual physical cd. I wanted the liner notes, the photos of Clarence Clemens and the other E Street hooligans mixing it up behind Da Boss. This was an album worthy of such a quest, even though I then would need to spend time synching the cd to my online/ipod devices.

Alas, Music Millennium no longer exists (even if its website still does). The default for all music is the overwhelmingly popular itunes or some other digital interface. No more browsing through the bins, shelves and racks in a darkly lit, hip, funky venue appointed with Sharpie-penned signs and vintage candy. I find it odd that Walmart has usurped the role of the local music hukster. Magic was on sale today at the corporate behemoth for $9.72, which is 27 cents less than what I spent at itunes for the download. I may be somewhat of a Jersey Girl, and definitely a fan of "everyman" themes in literature and lyrics, but I refuse to go to Walmart for my music.

As physical venues for art disappear like rain forest species, I'm led to ponder this scary question: Will bookstores become extinct too?
Posted by Suzy Vitello at 3:38 PM