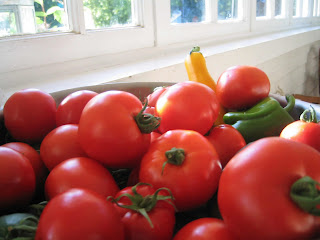 This is a sample of what came out of my garden this summer. Yesterday’s harvest.
Since this is a writing blog, as opposed to a food or gardening blog, here’s where I make the metaphoric leap to creative bounty. Lush, ripe, overflowing muse. I look at that bowl of tomatoes, peppers and crookneck squash and should think: the fertility of imagination. The infinite possibilities of translating abundance to the page.

You know where I’m going, right?

Some of my writer friends (Chuck Palahniuk, for instance), channel inspiration through physical activity. These writers have an idea, then go outside and build a patio in order to flow the idea through their bodies. To concretize it, crystallize it, imbue it with authority.

When I go outside to weed the garden, let’s say, or paint the side of the garage, any fragments of inspiration poof into the ether as monkey-mind settles in like an unshakable fog. Quotidian tasks queue up, and before I know it, I’m in line at Home Depot buying two-stroke gas for my weed whacker, my characters all on holiday somewhere beyond the ozone and out of reach.

The problem with me, I’ve decided, is that I haven’t figured out how to integrate the pragmatic, quotidian aspects of living with my life as an artist. Those perfect tomatoes and everything it took to grow them compete with writing rather than help to generate more of it.

Usually what happens to writers like me is they end up turning their conflict into prose. Like I’m doing now. Erma Bombeck type stuff. Essays on domesticity and the trials and tribulations of parenting. And I’ve done that, of course. And it’s mildly satisfying. My Sweat in the City column was full of that stuff.

I have this great supportive boyfriend who, truth be told, is responsible for the tomatoes in that bowl. He’d be thrilled if I’d just turn over the garden and the garage painting and all of it to him, and tip-toe up to my ivory tower and write.

So I have no excuse, really. Other than those seductive tomatoes. And the cookies I want to make for Carson right now because it’s his last day of summer vacation. And thinking about kissing my boyfriend. And the bike ride I want to take. And the blind pug who needs to be guided down the porch steps in order to take his morning crap. Oh yeah, and don’t forget the hangover I’m battling due to the bottle of wine I drank last night with my friend Rachel in her backyard as we burned the discarded lathe and plaster of her remodel-in-progress. I don’t want to give any of it up. Except maybe the day job that I should be engaging in right now.

So I’m not engaging in pragmatic discourse here. It’s more of an existential dilemma I find myself in. The psyche wants what it wants. Today, it wants a tomato sandwich.
Posted by Suzy Vitello at 9:16 AM