will write for water 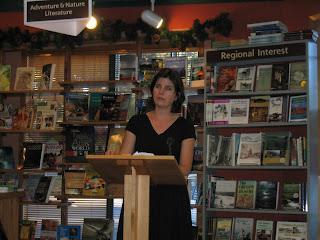 Monica and I have returned, safe and sound, from our over-the-Cascades turn-around. In a weird timewarpish valderi valdera, we got to the bookstore just in the nick of time for our 6:30 reading. 6:30? Hm.

We barely got the kids fed with morsels from the cheese/cracker/wine goody table and discussed reading order/logistics with the manager before the onslaught. And by onslaught I mean three eager book enthusiasts.

A holiday weekend in a resort community should have garnered more interest, particularly since there was a lovely write-up on Clown Girl in an area newspaper. Alas, Paulina Springs Bookstore was not on the list of end-point destinations for the Sisters/Black Butte set. Nor did literature fans venture the 20 miles from culturally growing Bend.

The three (four, counting the bookstore manager) polite listeners were terrific, however. I "opened" for Monica with a story that only has one risky part and no f-bombs. In a wonderful twist of coincidence, one of the audience members was a plumber, as was the hero of my story! I was so glad I hadn't named my story The Disgraceful Plumber or something. Whew.

Before the reading, Monica had convinced me to scribble prices on the back of my books. "People respect you more when you charge for your work," she said. So, while Monica, Mavis and Carson were engaging in the 10-minute swim at the hotel (we had thought the reading was at 7:30, and as everyone was suiting up I phoned the bookstore to confirm the time. Oops.) I scribbled $3.50 on the backs of my books.

At the bookstore, in an act of pure brazenness I passed out my books like hymnals before advancing toward the podium, and I suppose I shamed two of the patrons into buying them!

I have a bit of a binge problem at indie bookstores, I must admit. I've never been able to browse without whipping out the credit card for a stack of product I buy often for the cover alone. But this time, with $7 dollars in my hand, I resisted. It was sort of like getting a chit from AA I guess--you know, a little reward for staving off addictive impulse. I left the store richer than when I came in. But, as Monica pointed out on the way back to Bend, I left without getting paid.

"Did you get your bottle of water?"

"That's your pay," she said, hoisting up her own Kirkland Springwater, which was half gone at this point, having been used to soothe her throat which had begun to act up the minute we crossed the pass into the forest fires of Central Oregon.

The lack of irony in that comment made us both crack up. Starving writers on the road--at least we'll never be thirsty.
Posted by Suzy Vitello at 12:35 PM