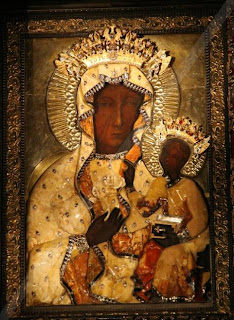 Am three hours from popping off to holiday. A week of R & R with my sweetheart which begins with a soccer tournament for Carson later today, a hand-off to Carson's dad, then bring on the M&Ms 'cause it's road trip time!

This spring break couldn't be more welcome. It's been a rough winter. Kirk's been sick half of it, and I'm coming off some horrendous stomach/head thing (mixed with a particularly heinous "monthly" sitch--God, bring on menopause for real, this perimenopause crap is like giving birth to eight pounds of placenta. ok, tmi. But it's my blog, so fuck it).

So I just finished a rewrite of a project I began in, uh, 1993. Yes, 20 years ago. This project, a novel, has gone by the name BLACKDIRT lo these decades, and it's chock full of homage to the grotesque (in particular, grotesque's intersection with Old World Catholicism), as well as more than a few erotic elements, along with a smattering of, well, let's call it twisted girl-power.  I'm pretty sure the period from hell is nature's way of sage-sticking the project from my uterus. A 20 year pregnancy (albeit, many of those years dormant, you know, like a virus that hides in a rat?), followed by six weeks of labor.

Want to know more about this baby? Of course you do!


Lily’s father is a second-generation Austrian immigrant, second-generation small town physician, at the mercy of a proud and spiteful mother and a dutiful, sickly father. Lily’s mother, an orphan raised by Polish onion farmers in the fertile Hudson Valley black dirt, slowly dissolves into madness. Lily’s world view develops in the spaces between her Polish grandparent’s onion fields and the mahogany halls of her paternal Oma and Opa’s house.

Brought up in a dying Catholic culture by parents who are torn apart with longing they can neither satisfy nor transcend, dyslexic Lily falls prey to the nefarious elements of a collapsing rural landscape, and slowly sinks into the voices of Rue and Camellia, a duo that acts as both guide and the bridge to dark family secrets. Once Lily discovers the haunting truth of her existence, the voices take over and propel her to seek revenge and transcendence.

Framed with a thriller overlay, Blackdirt edges into magical realism and allegory, where myth and reality merge, the edges blur, and Lily becomes a symbol of pagan transfiguration on the cusp of a contemporary fin-de-siècle.