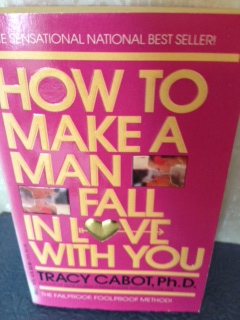 A dozen white cotton gloves in a cardboard box. CDs imploring SPEAK GERMAN! and SPEAK ITALIAN! nestled next to Christmas globes. Cleansing creams and how-to manuals, salmon-silver Jell-O molds and hankies embroidered with Ethiopian mothers bent over under the weight of babies and gourds.

A Thigh-Master, still in its box and advertised by Suzanne Somers's pile of hair and smiling face, leered at the shlumpy masses as they traipsed up steep stairs embellished with blue painting tape to prevent mishap. Self-help paperbacks bleached by the years were spread out in a disheveled pile in an upstairs sleeping porch. All these items, and more. The legacy of some dead lady.

Today was a field trip illustration of folk singer Cheryl Wheeler's terrific song "Estate Sale," and it touched the same nerve that Cheryl's song does, the way we would-be gold-diggers were poking around in all of her stuff. For $1.75 I got a set of six vintage cocktail glasses, the Ethiopian mother hankie, and a bestseller by Diane Mott Davidson called "The Grilling Season" with a tagline that read: Revenge against your ex-husband can be a tasty dish--it can also be murder. 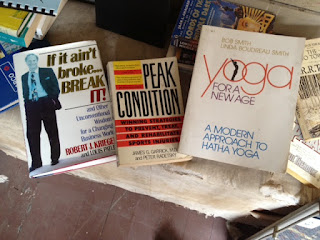 Which gave me pause. I wondered about this dead woman and what wrongs she may have suffered. Who, I wondered, had fucked her over? What was her story? Was her husband a philandering bastard who flirted with and fucked the barmaids down the street? Or was she widowed early on, and left alone, slowly rotting into an Alzheimer's decay until one of her kids tossed her into a home? At one point, she'd wanted to learn yoga, bridge, this woman. She was willing to try new things. To be better at stuff. She longed to keep her hands soft, her heart ready, her thighs firm. She had an electric wok. Imagine that? I almost bought it (everything was 75% off).

As I hauled my paper sack of loot down the crumbling steps, my joy at the deals in my bundle was mitigated by a sorrow. The sort of sorrow that usually sends me into the deep end of project. What sort of fabrication might I conjure? How might exploit the clues here, churn them up in the mixer, and spit out, say, 80K words?

Whose stories have you stolen lately?
Posted by Suzy Vitello at 9:58 PM