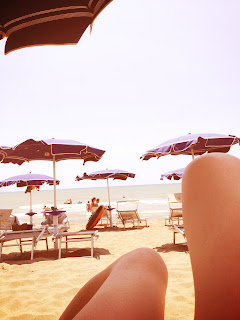 Haven't been writing much. Or thinking much. Mostly, just gazing out at the view beyond my knees. Tough life, right? Decisions are all made in accordance with the heat, wind and direction of the sun. How divinely retro, to depend on nothing but nature, yes?

This week, Kirk and I have been holed up in the piney woods-framed Mediterranean sea town of Castiglione della Pescaia, in the mostly Swedish-run resort Riva del Sole. Like much of our trip, Riva is fairly free of the American tourist scene, and because my iPhone's "translator" isn't all that quick in the spotty wi-fi zone here, I mostly communicate by pointing and gesturing when I need, say, a glass of wine or a scoop of gelati.

Holidays in Europe emphasize downtime, I've noticed. People here are very good at relaxing whilst looking beautiful. Me, I have to say, it's all a little strange, this beach vacation thing. First of all, there's my fair skin and dry, curly hair. Like bratty toddlers, they're constantly whining at me: Do you even know the damage seawater does to me? What do you mean we're going to the pool again? I miss the slimy wetness of Portland!

But also, even more akin to my feeling of disconnection, the beach, as our pal Anne Morrow Lindbergh pointed out so many moons ago, "is not the place to work; to read, write, or think."

At least at first, she admits before launching into her oft-quoted book. Lindbergh continues, "And then, some morning in the second week, the mind wakes, comes to life again. Not in a city sense – no—but beach-wise."


Unfortunately, I'll never know if that's true for me, as we're packing tonight and bee-lining to Salzburg (where I hear it's 60 degrees and raining). We're leaving the Italian vacation pace behind and plunging back into the land where Internet is never spotty, and clocks are obeyed.

Thinking more about Lindbergh's assessment of the first week on the beach, and my own sense of flaccidity these six days, I suppose I could liken it to a form of detox from the workaholic agenda-driven life I lead at home (and even the aspects of vacation which are destination-driven). The compulsion is still there, just under the surface--the first two days I had to slap my hand away from the potted geraniums on the resort patio, so badly did I want to deadhead them! Allowing a rhythm other than the one churning with intent is really, really hard. The day the server went down here at the resort, I about lost it. So dependent am I on modern lines of communication. (But I have to post on Facebook for the crouton company! Yikes!)

Oddly, too, my usual ingestion of intoxicants is all out of whack. Instead of a pot of coffee interspersed throughout the day, I have one or two shots of espresso. Wine every night, of course, but a couple of glasses spread out over hours. It's pretty much been the Mediterranean diet by default here. No butter, no heavy meats. Lots of fresh veggies and fruit and olive oil and fish. A little chocolate. Those Italian cookies, of course. And cheese. Which seems to like my better here than it does in the U.S. Go figure.

As far as the beach-reads go, Kirk and I just dovetail read GONE GIRL, which was great fun. Though he seems to be looking at me askance lately. (He thought the initial "cool girl" self-description of the Amy character was totally me, then freaked out with the * SPOILER ALERT* way she emerges as a psychopath.)

I've caught up on some YA reading, and when the Internet works, I check in with the "world" via Facebook and so forth--managed to "WhatsApp" my kids, and that's always reassuring. Back home our chickens are fine, I'm told, and our kitchen remodel seems to be on track.

So why am I waiting for the shoe to drop? Some disaster to tumble out of the sky? Is it part of the workaholic detox thing? Or the getting ready for reentry thing?

Let me ask you this: in the midst of a fabulous time, a relaxing vacation where all is well, do you obsess?