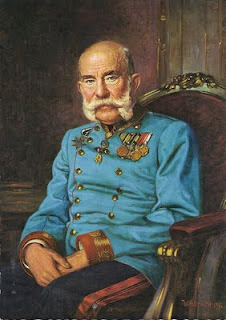 So my dad and sister are cleaning out the home of my still-alive grandmother (she'll be 99 on July 4th), and unearth the usual array of sentimentally odd keepsakes: the hospital gown my grandfather died in, letters and cards written in hasty scrawl announcing various grandchildren's births. Handkerchiefs and trinkets from the "old country." Announcements. Tons of black-and-white photos. Three generations of memorabelia.

My father calls me up and says, "As the family historian, I think you should be the keeper of this stuff."

My father goes on further to make his case for boxing up the crap and sending it across the country. I interrupt. "Just pick six things. The first six things you lay your hands on. Don't discriminate. Just send me those six things and throw the rest of the shit out."

Today, a medium-sized priority box arrived stuffed with envelopes of photographs. Mostly pictures of my dad--a beloved only child of Austrian immigrants. But as I pawed through the detritus of family chronology, I came across an odd envelope smeared in blue ink that announced: Karten von Onkel Wassmuth. Inside the envelope were three postcards signed by Wassmuth, who, my father wrote, was my grandmother's uncle. Two of the postcards are of buildings in some sort of obviously Viennese square. Then there's the third.

Recognize that stately fellow in the blue uniform above? That would be Emperor Franz Joseph.

I shit you not.

In 1915, the year before the Emperor died, my great-great grand uncle, Heinrich Wassmuth painted a portrait of him. "Him" being the husband of Sisi. Yup, that Sisi. The one I just wrote a novel about. There's even evidence on the Internet!

So, moral of the story? Don't be so fast with the directive to go immediately to the nearest dumpster. Thanks for sending this all those years ago, Urgrossonkel. And thanks, Dad, for sending it my way. And as for Franzl? Even as a codger, he has the most amazing blue eyes. No wonder Sisi was, at various points in her life, so smitten.
Posted by Suzy Vitello at 8:46 PM