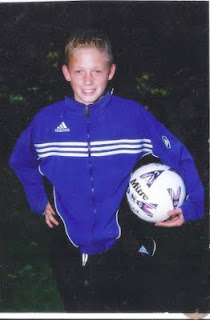 I've been a soccer mom for nearly 20 years. That's two decades of orange slices, shin guards and yelling at the ref. I've loved every minute. Number 30, below, is my youngest. The kid on the right, blue jacket, is my oldest, now 24.

So, yeah, I'm a sideliner, but I'm no stranger to the perils of competition from a non-vicarious standpoint. I did the equestrian thing. Ribbons and ratings and judges. Thank God none of my kids got into horses. I remember my father once, after I was eliminated in the cross-country phase of an event, making me go over and over the jumps on my exhausted quarter horse, Sweet William. Etched into my brain is my dad's sunburned and pissed off face, contorted and shrieking from the center of the field, "You take him over that hogsback again and again until it's as smooth as butter!" 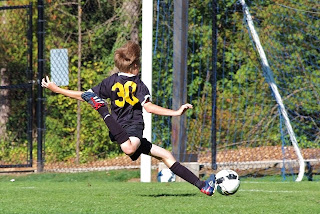 I swore I'd never put that trip on my kids. Not me. I'd be a soothing, loving mommy with a Tupperware of homemade Tollhouse cookies. Win, lose, it wouldn't make a difference.

It's an instinctual thing, the glee you get watching your kid when he's in the zone, racing down the field like a gazelle, arcing a ball over the keeper and into the upper vee of the net. And then there's the visceral reaction, when your son is pushed off the ball, cleated in the back, given a yellow card for reckless play (or in the case of my oldest, telling a ref to fuck off). Look up and down the sidelines next time you're at a youth soccer match. Watch the parents' feet shuffle as though they themselves plan on kicking the ball down the field. We can't help it, us soccer moms and dads.

So, mid-May is tryout time for club soccer. It's stressful, emotional, and in some cases just plain evil. My 12-year-old is looking at several teams. In his behalf, I've emailed coaches, queried parents of kids in other clubs, driven 20 miles in commuter hell while my son wolfed down a turkey sandwich and a piece of pie. Homework is on the back burner. The house is a wreck. Everything but jerseys and soccer shorts is filthy. Last night I brought home the crappiest Mexican food ever for dinner at 9:30, procured from a place that smelled of Mr. Clean and fryer grease.

Team A, the elite team, is interested in my son. Team B also. And Team C. He's 12! I've filled out reams of forms and waived scads of potential liability. Most afternoons the last couple weeks, I've stood at the side of various fields, like my father, hoping, in each and every session, my kid blows the other kids away. It's disgusting. And by It's I mean I'm.

So this afternoon, my son says, "I'm tired, I'm going to blow off the Team A tryout." And like the Mrs. Hitler I am I sternly pontificate, "Then how will you make an informed decision?"

He rolls his eyes. "I've made up my mind. I'm going to choose Team B."

"But what if Team B doesn't choose you?" I stammer. "You sure you want to burn your bridges?"

"Really? Well, okay, but you're not going to sit around watching i Carly. Finish your snack, turn off the tv and do your homework. Then take out the trash." Yup, I really said that, because in the parlance of the Timber's Army, No pity!

So then my son says, "How come whenever I don't do what you want you throw this chores stuff in my face?"

I sigh one of those long-suffering sighs. The mom version of the red-faced take him over the jumps command. Then I stomp upstairs and pour a merlot.

But in the wine-induced mellow that ensued, I realized a couple of things. My kid has figured out what he wants. He's made his mind up based on gut and experience. And, it's doubtful that the team he wants won't want him, but even if that's the case, who gives a fuck? So, chill, Mom! Enjoy the fleeting childhood of your youngest child. You got maybe six more years to scream at the refs. And then, perhaps, you'll get a little rest before it's time to be a soccer grandma.
Posted by Suzy Vitello at 9:22 PM