teapunk: the long dark teatime of the soul 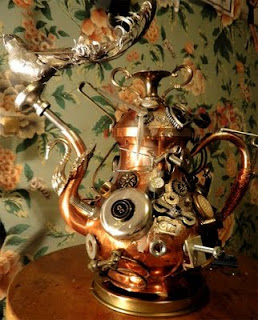 I've written a book that doesn't fit all that neatly into any particular classification beyond young adult. THE EMPRESS CHRONICLES is part romance, part historical, part contemporary-issue, part mystery, part urban fantasy, part magical realism, part steampunk. Actually, what it might be more than anything is a modern fairy tale. But, there is a mood that I want to encapsulate with some sort of distilling and overarching word or group of words.

At my day job, this would be the perfect opportunity for a branding exercise we call a 360. Essentially, in our 360s, clients and their trusted advisers gather in a room, and, following an agenda, we trot the clients through a brainstorming session that results in clarity and goals and all sorts of cool stuff.

In lieu of a traditional 360, I did some poking around, and, Et Voilà, I found a curious emerging sub-genre known as teapunk. Conjuring a Victorian moodiness and a fantastical Alice and Wonderland element, teapunk celebrates tea culture with a nod to some of the Victorian stylization of steampunk. Some go as far to suggest teapunk is a wide embrace of 19th century culture generally.

But what I like most about teapunk, is the punk-- a hint of the contemporary part of the historical/contemporary duality. And, borrowing from the quick definition of steampunk (a genre that features anachronistic technology in the Victorian era), teapunk might be thought of as a genre that celebrates the mood of Victorian culture via interface with a contemporary perspective. Ok, I made that up. Maybe better would be to quote the facebook page (and I paraphrase): Take the SM out of steampunk and steep in the long dark teatime of the soul.
Posted by Suzy Vitello at 10:15 AM