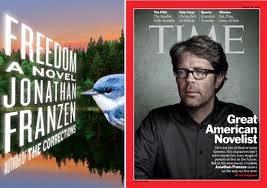 NOTE: this entry is full of Spoiler Alert passages.  If you haven't read the latest Franzen, and intend to, and don't want to know anything, don't read this.  You've been warned.

Two hours later, I am still savoring that last epiloguish chapter of FREEDOM. How I feel is the way a person feels after making up with a spouse or best friend post-huge fight. Salty afterglow of mixed emotions, and oddly, not as spent as I felt 90% of the way through this crazy book.

I realize I'm about to mix metaphors, leaving spouse/best friend and moving into bad boy teenaged boyfriend territory, but I'm having a "see how I am?" moment.  As a youngster, I tiptoed to the dark side just enough to glimpse danger, but not, thank God, enough to cause the need for a lifelong balming of scars.  I've always maintained a sort of arrogant anthropological distance from crazy and/or dangerous folk, finding them fascinating but always checking behind me for the quickest escape route as I was led down the dark tunnel. What I liked best and appreciated most about FREEDOM was sensing that same distance in the narrative. I realize that this eccentricity most likely casts me in a weird minority, and I would venture that the same distance is seen as a flaw of the book by many more astute readers than myself, but there you have it.  Ironic distance, done well, trumps all for this reader.

What I liked second best [remember, future readers of FREEDOM, you've been warned] was the Joey extracting his wedding ring from his feces scene.  Oh the scatological indulgence!  Every boy child's obsession, yeah?  To linger in the concrete description of poop for several pages?  Only to be outdone by the continual micromanaged sex deconstructions--which I personally found excessive after a while.

Now, about the bitter commentary that Franzen slathered the book with: although it served the historical landscape well enough, it seemed rather incidental (and somewhat contrived) to the development of some of the characters and their predicaments.  Not all the characters, merely some of them.  But maybe that was the point.  Lalitha felt vastly cypheristic to me--though the reference to her in the very last line of the book made me cry.  But, in the storyline itself, she was sadly so two-dimensional that her actual death, buried in the middle of a cryptic paragraph,  was a shoulder-shrugger.

The wrinkled chronology: I wanted to hit Franzen for it. Truly.  I wanted to throw his tome at the back of his head.  Why did he indulge himself so by bringing in that cumbersome backstory on Walter's grandparents so late in the book?  It was a very authorial, obnoxious move, like when a musician you pay $150 to see (let's say, hypothetically, Dylan), pumps you up with a passionate performance of his best work, and then turns his back to you and the rest of the audience and steers the concert into experimental, boring shit--or worse, retunes his guitar while you stand there in the rain, blowing hot air on your hands until he starts playing again.

But overall, you got to admit, the guy is an amazing writer.  His clarity, his perfect sentences, his incredibly well-developed irony, the juggling he had to do to pull off any sort of a halfway satisfying ending with all those damn characters he peppered into the prose.  The way he infused the freedom metaphor in myriad ways. Whew!  I bow to you, Jonathan Franzen, mostly I do. And, because I said I would, here are the remaining top five reasons I bow.

1. unflinching ring-in-the-shit scene
2. finding a wonderful and heartfelt way to show Walter's complexities at the end of the book (he was annoyingly underdeveloped for me until then--then, suddenly, I got him)
3. pretty masterful redemption of the main characters given their shitty behavior throughout the book
4. reasonable attempt to tackle political shifts over time through interesting characters (though I have to let this percolate for a while, because I suspect I'll find this less successful upon reflection)
5. not one typo or out of place word in the whole 562 pages
Posted by Suzy Vitello at 10:03 AM