Rock and Roll and Steve Almond 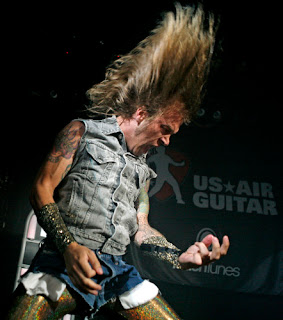 Remember when all that kept the breath going in and out of your flat little chest was shutting your bedroom door, slamming down the Close 'n Play, and wailing along with Linda Ronstadt as she compared her broken heart to a wheel? Or maybe bootleg Dead tapes were your thing: Smokestack Lightning at the Filmore, sheeeeettt! Or, like my darling husband, The Guess Who still trips your trigger. He had a roommate his first year in college who played the band's one record religiously. The Pavlovian association with American Woman and brewskis, all that.

Reading Steve Almond's Rock and Roll Will Save Your Life brings it all back. Almond's homage to the music that caused him to become a Drooling Fanatic (DF), along with delicious rants about the vapid pop that plagues the masses, makes this the latest must read in Almond's theme-driven memoirs. (C'mon Steve, candy, music, dare I ask what's next???)

The book is laugh-out-loud funny, btw, and his accompanying tour--complete with a "bad hair" introductory slide show and playlist, offers more goodies, including Almond's comedic timing and charm.

I have to admit though--I don't quite have the chops to call myself a DF. Maybe a DFH (Drooling Fanatic Hag), since, as a college coed, I hung out with guys for whom Jerry was God, and a lost weekend meant quizzically enduring a Pink Floyd marathon, but me myself, my devotion is causal. Can't face the treadmill without Jungleland pumping into my earbuds, and don't be playing Brandi Carlile's cover of Hallelujah if you're not handing me an ice cold Scotch.

Like Almond, though, I get cranky at the effervescent popularity of inane tunes, especially when I see my kid latching onto, say, Replay by the hip hop icon I.Y.A.Z.

Replay, how apt! Especially since every car trip in the past three months has been accompanied with:
Shawty´s like a melody
in my head
That I can´t keep out...

(in an effort to proffer forth my disapproval in a palatable way, I made up even stupider Weird Al-esque lyrics:
Hotter than a four-slice toaster
that girl is a crime they say...)

And what's up with, I queried my boy, Shawty--which seems to be the pervading slang common denominator in my son's top ten.

"It means girlfriend, Mom." At eleven, he's got eye-rolling down.

Shawty is indeed the latest tweener euphemism for girlfriend. The Urban Dictionary defines it as fine ass woman, so there you go.

Over the last couple of weeks Carson seems to have moved on from Replay, thank God, and on to an I.Y.A.Z. song I like better (though it's similarly mindless) -- Solo, which he plans to sing (ironically) in duet with another boy in the upcoming fifth grade talent show. My stomach hurts in vicarious embarrassment--have I spawned an exoticizer? Will he be wearing his ballcap backwards with his dungarees exposing his boxers whilst arranging his fingers into a palsy-like spasm? Is today's appropriation of hip hop by white kids the latest minstrel show?

But, alas, I have to let my child figure this all out on his own. After all, I was that lame ass (as opposed to fine ass) teenage girl listening to Ronstadt's covers of the world's most banal love songs. (Desperado, anyone?) And, the place in my brain where memorized Shakespeare sonnets should reside is SRO with the lyrics to all of Jim Croce's woebegotten ballads. I have some ammunition though. This morning's breakfast music included Almond's online soundtrack of Bob Schneider's Get Fucked Up and Do Some Fucking blaring from my computer. With all that funky inappropriateness from which to rebel, my kid will have to try a lot harder to shock his mama.
Posted by Suzy Vitello at 9:09 AM