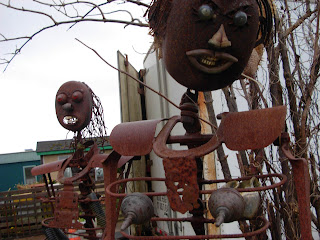 I am in paradise. Kirk, Carson, a friend of his and myself are holed up at our good friend's beach house in Manzanita while 90 miles to the East ice and snow continue to torment the "so over it" city whence we hail. Even though we're above freezing out on the coast, it's a nasty, cold, wet winter day out here, so mostly, we're inside, nestled near the gas-powered fake fireplace. It's a sort of "I in my kerchief and mom in her hat," vacation. There are videos, puzzles, games and books in every nook and cranny. After dinner tonight we gathered up odd assorted objects and played a homemade version of "blockhead," trying to create precarious towers that wouldn't fall. Kirk and I played a "speed anagram" game called "My Word," which nearly resulted in fisticuffs!

Our friends have appointed their house with many a book, and last night I pulled a random one out. A mystery type genre hardcover written by some well known author (well known enough to have her likeness encapsulate the entire back of the cover), and here's a sample of the language describing the main character's viewing of herself on the way to a party:

"As they descended to street level, she assessed her reflection in the metal elevator door and realized that her efforts hadn't been in vain."

It's not that that's a terrible sentence, it's just that it's not that interesting. If this person were in our workshop, we'd probably skewer her for a sentence like that. "Writerly language," we'd scribble on her pages. "Formal tropes."

But, hey, this gal has written, like, 60 books. Who am I to scold her for her received text? But, in my tragically elitist state, sentences like that can keep the lights on in bed for about 5 minutes, and then they begin to compete with other things I might be inclined to focus my attention on.

Ah, but all is not lost with regard to the literary possibilities therein, as we spent a bit of time today in what passes, in Manzanita, for a Goodwill. It's a place called Cart 'em, and it's a treasure hunting venue. Cart 'em is the receptacle for all things no longer desired; a place where locals dump their white elephants and the stuff that doesn't sell at their yard sales, and everything's organized in a 7,000 square foot pole barn. Treasures abound. Kirk gave each of the boys five bucks and turned them loose, giving them prompts to find Christmas gifts and art projects. They returned with armloads of stuff. As for me, I headed to the bookcases. Turns out there were two, count 'em, two copies of Irving's, "A Widow for One Year," a book I'd never read. I yanked it off the shelf, and it delightfully passed my opening sentence litmus test: "One night when she was four and sleeping in the bottom bunk of her bunk bed, Ruth Cole woke to the sound of lovemaking—it was coming from her parent's bedroom."

Provocative, right? Well, it gets better:

"It was a totally unfamiliar sound to her. Ruth had recently been ill with the stomach flu; when she first heard her mother making love, Ruth thought that her mother was throwing up."

Kirk's in bed benext to me with the "Outliers" I gave him as an early Christmas present, and I'm about to find out what awaits Ruth Cole, and I'm hoping that we're settling in for, as they say, a long winter's nap.