a funny thing happened on the way to the wedding 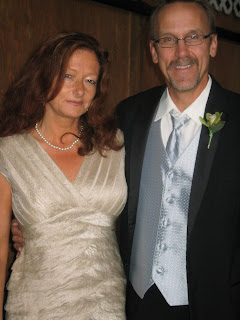 Nice dress, right? And that guy benext to me, he's my fiancé, aka, the father of the groom. Guess who else was wearing my same dress at this wedding?

Oh well. The wedding was terrific, and the bride and groom were adorable, elated and completely present during the whole shindig. I should take a page from their book. We all should, actually. How to be calm in the face of a life-altering event.

Aside from the look/feel/spirit of a particular nuptial celebration, every wedding has its own chemistry. You know what I'm talking about, right? There are the rancor and hard feelings weddings where you can taste bitterness in the air. Then there are the "let's get it on in the coat closet weddings" of lust and bad behavior. Not to be outdone by the "we're untouchable, keep your distance" society weddings where the bride and groom float about as if just sheared from the top of the cake itself, all consumed with the appearance of being the perfect newlyweds.

My favorite weddings are the ones that are clearly executed to reflect the choices of the couple itself. Where convention takes a back seat to personality, belief and a shared vision. Weddings that foretell the collaboration necessary in order to navigate a successful marriage. Brendan and Katie's wedding was one of those. From the bride's choice to forego a veil, but include a ceremony where their mothers bound them together with green ribbon, to the setting itself: a farm on the outskirts of Portland, under towering English oaks with the trickle of a creek as backdrop. There was no wedding march. Instead, a solo classical guitarist strummed a pleasant musical prelude. There were 12 bridesmaids and half as many groomsmen. Who says those numbers should line up, anyway?

As far as the reception, it took place in a fancied-up polebarn. Kirk provided homemade brew (which had been fermenting in my kitchen the last couple of weeks), the best man spun tunes from his computer (mostly 80's songs…go figger). We set up a slide show, too: highlights of the bride and groom as children as well as their nine-year romance (they met as young teens and have been together ever since, even during four years of college attendance in separate states).

The couple departed in their Honda Element, festooned with the usual signage and imperatives to honk for love and so on. They are in Mexico now, on a honeymoon that I hope isn't being spoiled by bad weather. And the couple pictured above? They're gonna be tying the knot too. But don't tell anyone, it's a secret! (And when it happens, nobody within a hundred miles better be wearing my outfit!)