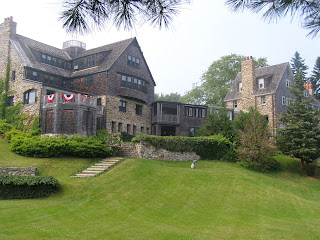 Just returned from the most vigorously inspiring journey! My friend Rachel is part owner of a mansion on the coast of RI. Kirk, Carson, Maggie and I were invited to partake in a Gatsby-esque summer home experience complete with salt sea air, the essence of unmitigated wealth and the company of charming heirs. Verklempt doesn't even touch it.

My new project is a fictionalized account of the family who has owned this place for more than half its life. Here's a tiny snippet:

Mr. and Mrs. Dick are dead. Your old-fashioned murder-suicide: bullet to the brain, bullet to the chest. The children were about, but the carnage was timed, as is often the case with well-thought-out homicides, to coincide with the imminent arrival of the housekeeper. The police followed shortly thereafter, having been tipped off by Mr. Sheldon Dick himself, who’d placed the call, speaking in the present tense of an act that had yet to occur.

I'm bombing along with a zeal I haven't had in months. I'm going to write this novel. It's too good, this backstory, to pass up!
Posted by Suzy Vitello at 12:12 PM