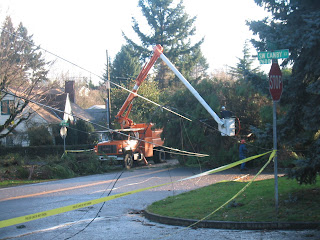 A storm blew through Portland the other day. Eighty-mile-an-hour gusts uprooted trees and splintered massive branches. Thousands of families lost power for days—hundreds in my neighborhood alone. For 24 hours, the Willamette Valley was cut off from points east and west by hurricane and then blizzard conditions in the Cascades and Coast Range.

Typically, winter in the Pacific Northwest is a long, slow, damp affair. One gray, soppy day after another, with the occasional sanguine burst of sun. Much the same as our population, come to think of it. We mellow, flannel-clad fern-dwellers, we like our microbrews and our bitter, dark coffee and our moss-flecked roofs. But every once in a while, we crack open and wreak havoc with the status quo. Unfortunately, much of our press has to do with scandal and misfortune—Tonya Harding, Bob Packwood, Neil Goldschmidt, hypothermic hikers. (My father loves to forward me e-mails linking to yet another Oregonian in disgrace, letting me know, I guess, that he’s keeping an eye out for me—or on me, perhaps?)

As a culture, we’re pretty young out here in the upper left. I’d like to think we’re still mulching our art. Building up compost to sustain generations of artistic fertility. We’re not as angst-ridden or intellectually nimble as our eastern counterparts; instead, we’re rather cautious and particular. Kinder, perhaps? Less convinced of our momentary authority?

I watch people a lot. Lately, I’ve been spying on families. Couples and their body language. Their roles as they march through town. Here’s what I’m noticing; the women are getting more frantic, and the men are becoming phlegmatic. Okay, okay, maybe I’m projecting. I’ll allow that that may be the case. But. Time after time, day after day, I see a little family embarking on, say, a bakery. The dad is carrying one of the children in his arms, while the mom is multi-tasking to beat the band. She orders, then explains to the whining kids why she ordered as she did. She procures the cutlery, the napkins. She hunts and gathers extra chairs from nearby tables. She flies around the room, leaping up from the table for cups of water or bar towels to mop up spills. Meanwhile, dad is trying to extract the kid from a front pack, or take off its parka, or keep the kid from tearing open yet another creamer. Dad looks war-weary. Exhausted. Okay, I’ll say it—downright catatonic.

Here’s a couple I witnessed on an elevator yesterday. It was one of those security elevators, where you have to insert your room card into a slot before the elevator will move. The woman was explaining all this to her clueless partner. He asked her if she had the room card. He’d forgotten his. He asked her if she remembered their room number, he did not. He asked her if she’d made reservations for dinner, and when. She attended each query with clear, measured answers, as though guiding a feeble-minded octogenarian.

My own son, on vacation from college, fell asleep with an empty saucepan of macaroni-and-cheese by his bed the other night. When he awoke, at noon, I offered a moderate amount of opprobrium, and asked him what his girlfriend thinks of his slacker behavior. I asked him what was up with these over-achieving women and their lackadaisical sweethearts. (His gf, by the way, is an 'A’ student, pre-med, speaks three languages fluently, and busies herself with all manner of domestic tasks—like cooking my son dinner and baking him pies—betwixt bouts of studying.)

“What’s the attraction?” I asked my son, with no rhetorical intent.

“I guess it helps them feel better about themselves,” my son mused, in all seriousness. He cited several examples—his Halo-playing poker pals seem to have found themselves in similarly fortunate circumstances.

But then again, I know my boy has come through in certain ways for his young woman. He is gentle, sweet and caring. Those dimples in his cheeks, that inability to be anything other than what he is. His overwhelming comfort with himself. All that calm-in-the-storm that exudes from his conservative push toward grace.

So therein lies my attraction to Portland, maybe? You can’t help but find balance here. The city is awash with mitigation. That, and tree debris.
Posted by Suzy Vitello at 11:56 AM