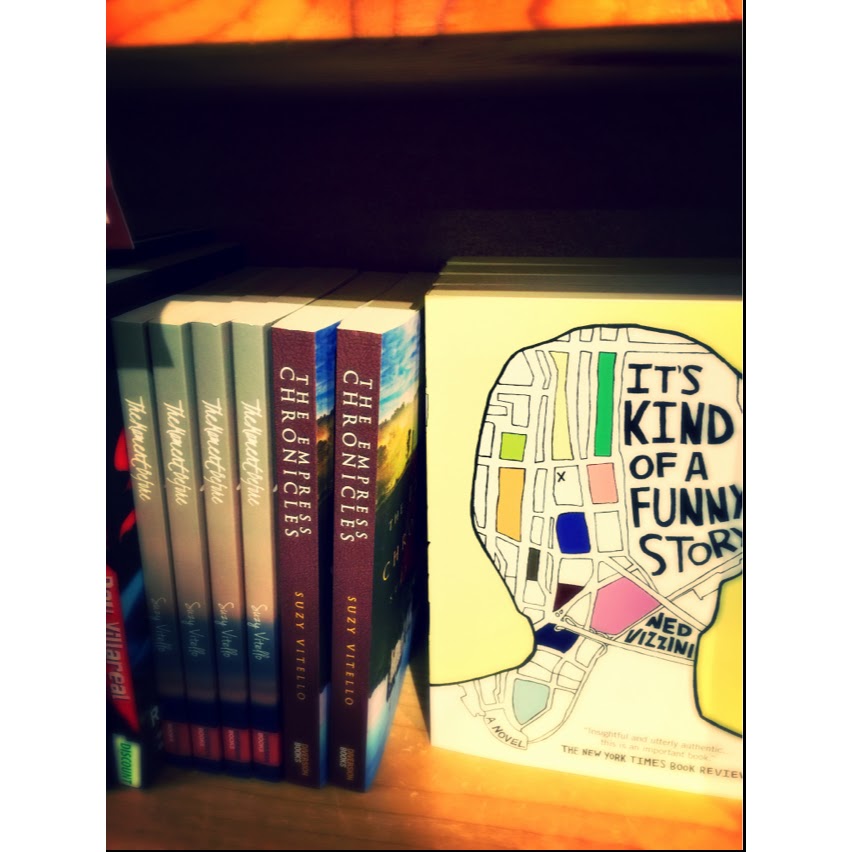 In the many, many years before this one - when I would sneak into bookstores and libraries stealthily with the sole purpose of spying the exact spot on the shelf my books would live if any of them ever got published - I often lamented my near-the-end-of-the-alphabet name. Vitello. Fat chance of an impulse buy, there, right? Was it too late to rename myself Suzy Aaron?

Back when I thought my eventual books would be housed in the literature section (hoity-toity, I know) I imagined myself wedged between Jules Verne and Kurt Vonnegut. That's right, my dark prose would rub elbows with Twenty Thousand Leagues Under the Sea on one side, Cat's Cradle on the other.

But when I started writing YA, I shifted my surveillance, and began nosing around the end of the alphabet in kid lit. And that's when I discovered Ned Vizzini. Vizzini! A YA paisan, I thought. The Italian last name. The teen angst themes. I brought It's Kind of a Funny Story home for Carson. And the Teen Angst book, too. He particularly took to Teen Angst, because he was doing an autobiography unit at school. Turned out, though, I had to go to bat in my son's behalf when his 7th grade language arts teacher declared he couldn't read it for credit.

I had to tamper down my Bea Arthuresque indignation, whipping into the school in my cape and  wine-color lip liner. "This is exactly what middle school boys should be reading," I argued.

"It looks like a cartoon book," she said. "It's not serious autobiography."

Oh, but I was prepared. I had the list of accolades from esteemed sources claiming the book's merit. In the end, she reluctantly agreed to let him read it, but she wasn't happy about it.

Carson was devastated by my pushiness. And embarrassed. But he loved the book, and read, rather than skimmed it - which was a supreme accomplishment. 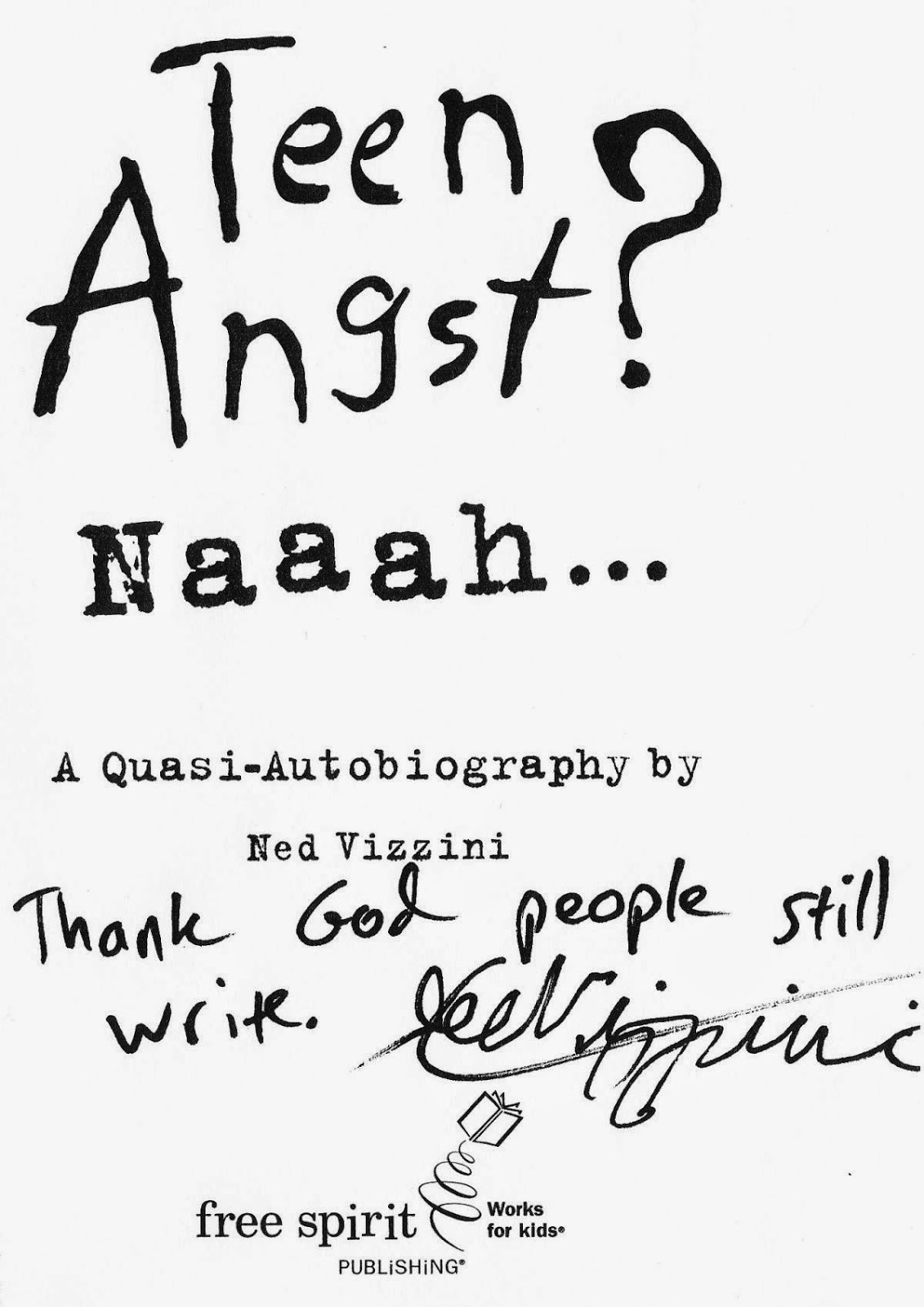 So when I got my book deals, I began thinking of Ned Vizzini as my soon-to-be neighbor.This guy who shared my sense of snark and disdain for asshole teachers. Who wrote his truth directly to his audience - and was known as a sensitive, kind soul who spent hours chatting with his fans in bookstore lines. A neighbor anyone would be thrilled to have.

In various bookstores, I stalked the  P - Z young adult shelves, my eyes grazing along until they landed on the (always face out) white and black map head cover of Funny Story. There, I thought. That's where my books will live next year. Next to Ned. My little ramble-shack cottages next to this architectural masterpiece!

And you probably know this, but a month before I officially moved in next door to Ned, one year ago today, in fact, he committed suicide. He jumped off a roof within view of the Brooklyn Public Library - a place he publicly supported and revered. I saw the tweets, one after another and I was bowled over in disbelief. This guy who had saved teenagers' lives - an outspoken advocate for mental health intervention - had been suffering more than anyone guessed. Somehow I felt that since he wrote about his darkest fears - offered up his journey through depression and pointed toward hope and salvation - that he was immune from a devastating outcome.

Today I ran across this lovely tribute by an author-friend of his, and it gave me further insight into my bookstore neighbor, Edison "Ned" Vizzini, and all day I've been thinking more about the separate lives of books - and how they're lived apart from their creators. The life inside of a book is often a hopeful construct. An imagining that ends in triumph. I think of Ned and me. Our side-by-side stories on the pine shelf - our characters' heartbreaks and salvations - I like to think that the worlds we built, Ned and me, and all those lucky authors with first-half-of-the-alphabet names, are transcendent of our failures. That they connect readers with their humanity regardless of the fragile nature of the artist.

And that's why I'm hoisting a glass to Ned tonight instead of feeling sad. Ned Vizzini left us at the young age of 32, but he left us rich and fat as fuck. I love that his books are squeezed up against my books. That the heartbeat of story continues, no matter what. Thank God, Ned. Thank God people still write.