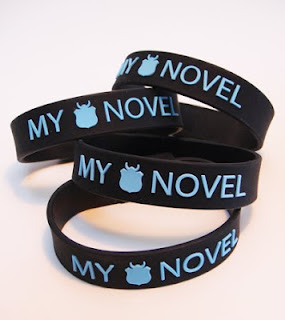 Greetings from your resident naysayer and spoilsport. Today is November 1st. Day of the Dead AND day one of the 2012 NaNoWriMo blitz. Coincidence? I think not.

Don't get me wrong, I have been a fan of the writing bootcamp, and think it can be instrumental in getting a project off the ground. I've done it. It was an interesting experience, and I got a lot of pages written. Where are those pages now, you ask? On a long crashed hard drive--but the kernel of my project morphed into something that ultimately survived.

The best part of the experience for me was the connection element. I had a few buddies, and at the end of each session we'd trade our final paragraphs of the day. I looked forward to them sparkling down in my inbox, and was eager to share my own, so that kept me motivated and accountable.

That said, I do have reservations about NaNoWriMo. Or, I should say, one GINORMOUS reservation, and that is, the experience can lead to the absolute opposite outcome for writers. Instead of fueling production, it can be one more distraction. E.g. checking in on all your fellow WriMos to see how many words they've written, or spending additional time blogging, responding to blog posts and tweeting about word count, or lack thereof. Even locating the widget you want and backending it onto your blog sidebar can take as much time as writing four pages.

Can you say sink hole?

In the last four years, since my foray, writing communities have bubbled up all over the place. Social media and its ubiquitous, meteoric presence can be another full time job on its own, so with the addition of WriMoVille, you're taking minutes away from writing time. And who has minutes, right?

A few months ago, I wrote a novel in 70 days. A novel that, according to my agent, was in pretty good shape. The final draft took another three weeks, and now it's out to editors, so it's not that I'm a killjoy regarding butt-in-the-seat. For me, it's all about focus. I had to do less things instead of more things to get those 60K words down (and those were the keeper words--double that for rough draft). I had to be strict about my time on social media and extra curriculars and the sorts of communication enticements dangled before me.

I do like the idea of setting goals though, and I think what's most important about the idea of National Novel Writers' Month is figuring out what's the right goal for you. Maybe it's three chapters you work hard to polish. Maybe it's shitting out that initial lump of coal. Maybe it is, indeed, simply connecting with a writing community. My bit of caution, as a dyed-in-the-wool non rule-follower, is to make your WriMo experience particular to your goals as a writer. Don't get sucked in by the numbers unless that's what's important to you as a writer. In other words, make your own rules!

So tell me, writers, what do you wish for writing selves this month?
Posted by Suzy Vitello at 11:32 AM

Email ThisBlogThis!Share to TwitterShare to FacebookShare to Pinterest
Labels: NoNoWriMo 2012