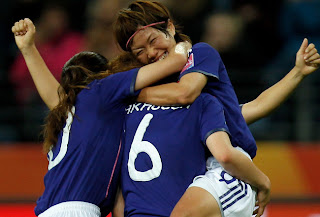 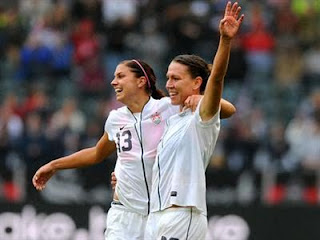 I am so totally in love with our women's soccer team. Megan, Hope, Abby. They sound sort of like Powerpuff girls, don't they? But they're beasts on the pitch. All except for Alex Morgan. I have to admit, I have a total girl crush on her, with her girlie-girl pink headband and her pink sports bra flaming under her jersey. My favorite moment of their 3-1 victory over France was Alex's game-sealing left-footed arc into the net in the 82nd minute (set up by my favorite player, former UP star Megan Rapinoe). Alex is young, a little unseasoned, but a total up-and-comer on the world stage, and today she finally showed what she's capable of. There's something "little sister" about her, and you get the sense that coach Pia is a little protective of her, but that girl has wheels.

And then there was the other 3-1 victory today, Nadeshiko. Those plucky Japanese women and their precise, energetic playing. If there's one team I wouldn't mind the USA losing to, it's Japan. Dwarfed by those big European girls, they completely owned the quarter- and semi-final matches. In a country so recently ravaged by disaster, and one also known for marginalizing females, I want to see those gals continue to kick serious ass. Unfortunately, the next asses on the agenda belong to Abby, Hope, Megan and Alex.

It's a win-win, I guess. I'll be happy either way. As long as the football stays as good as it's been this past week, and the "crackers" can be heard way out here on the left coast.
Posted by Suzy Vitello at 10:53 PM