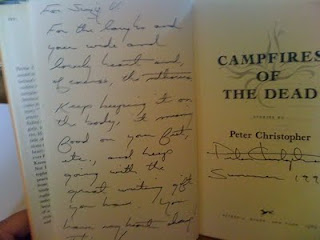 About a year ago a writing acquaintance, Steve Arnt, called me up out of the blue to ask if I was missing a particular book from my shelf. I drew a blank, because I have several hundred books: some on shelves, some in boxes, some in tubs.

He'd been looking for an out-of-print book by a writer named Peter Christopher. The book was called Campfires of the Dead, put out by Knopf in 1989.

"You certainly did have that book," he said. "It's inscribed to a Suzy V. That has to be you."

Why all of this is important to the story is, about a month before our trip, during staging and dismembering hell, in the worst real estate market in two decades, my current husband and I hauled three truckloads of "yours, mine and ours" crap from the basement. Lots of it mildewed, moistened, stinky and ruined. But some of it merely heavy and cumbersome.

What I'm getting at is that Pete's book, the one you see in the picture with the very personal, lovely inscription, was a casualty of the dysfunctional triage. Where did Steve Arnt find it? Goodwill.

Now, I've done a lot of stupid, irresponsible things in my life. Once, I left my four-year-old daughter locked in the car while I ran into a coffee shop for an espresso. A cop was at the car's window when I returned, two seconds from hauling me to some sort of bad parenting jail. Back in college, I often swam naked in a local reservoir, and often there were drugs involved, or alcohol, or both. I was a poor swimmer and prone, at that time, to anxiety attacks. Drowning was a real possibility. And I won't even go into all the usual post-adolescent hyjinks. But being careless with something as sacred as a rare book--a rare, personally inscribed book at that, is inexcusably egregious.

So anyway, what happened next was, I conveyed my embarrassment and thanked Steve, who had called me so he could return my book, finished my holiday, sold the house, moved into a new house, and failed to follow up with Steve about my Campfires of the Dead.

But last week, at Lidia Yuknavitch's Powell's reading, there, sitting full-faced across the room, was Steve. And guess what? He still, after a year, was eager to return the book to me. So, we met for coffee, and there, on the cafe table, was Pete's book, not one bit mildewed, water-logged or otherwise ruined. And I'd forgotten how lovely the inscription was, and how it referred to a particularly glorious summer in 1993 when I'd met him on the Oregon Coast during a writing workshop given by Tom Spanbauer, and that I had continually dropped food on my feet while we shared writing and nuthorns and laughs.
Posted by Suzy Vitello at 2:51 PM

Email ThisBlogThis!Share to TwitterShare to FacebookShare to Pinterest
Labels: campfires of the dead, peter christopher