It's the weekend most people dismantle all signs of the holiday. The Christmas tree comes down; the greeting cards get recycled. Any uneaten fruitcake goes in the trash.

Fitting for me that it's also the end of my first week on the cleanse. Eight days to be exact. 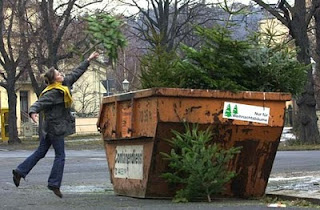 All the excess of December brought to an abrupt halt (I decided against the "elimination week" and just plunged headlong into the liquid meals and raw foods portion of the deal.)

That rusty recycling bin? Well, that would be the perfect metaphor for my body as it processes the detritus from my holiday of overindulgence.

I've de-tinseled, unstrung, and otherwise shed the fun and glitter from my daily regime. Sigh.

It's been hard, really hard, and I'm only a quarter of the way through. I now completely understand why Women's Lib corresponded to the invention of the microwave and McDonalds. Who, other than a designated-stay-at-home, has the time to prepare fresh, raw food? The planning, procuring and unpacking of the ingredients alone takes a fucking half-a-day. Friday? It took me an hour to make my lunch. Ten minutes to eat it. And then another 45 minutes to clean up afterwards.

So, why am I continuing on? Is it some early Lent? Am I atoning? Well, of course I am. But that's really not the main reason I'm moving into week two weilding my produce knife like Sinbad the Sailor.

Here's the scoop (and I'll warn you before it gets into tmi, which it will).

1. I feel a lot lighter.
2. Complete absence of the "bloated feeling."
3. Lost 5 pounds just like that (which was the weight that I gained in 2010).
4. No morning runny nose.
5. After the first four days, diminished aches and pains in joints.
6. Dark circles and bags under my eyes less noticeable.

7. I smell better (everywhere)
8. Even my shit doesn't stink. (Okay, maybe a little, but what Junger goes on at length about in his book is that normal elimination should not be foul--as it is when it's gunked up in there with the paste of the Western diet)
9. The usual mucusy stuff that tries to find a way out wherever it can has become almost non-existent.

Okay, and this last one? If you're my kids or my dad or something, you MAY NOT read it. Others, use your discretion. It's highly tmi.

10. I have it on good authority that I, uh, taste really good.

My energy is not consistent though. Sometimes, I'm incredibly tired, and gross motor stuff (like elliptical at the gym, for instance) is exhausting. Today, day eight, I cheated. I had a double espresso (but I used agave as sweetener instead of the usual 2 packets of Sugar in the Raw). I wanted to see what my body would feel like with a caffeine jolt on the cusp of yet another pilgrimage to Whole Foods for basics. I felt that familiar engagement: instant alertness. Which I liked. But I also felt like someone with a lead foot invaded my body and pressed down. My heart rate increased. I'm sure my blood pressure rose. It was an interesting experiment. Next week, I may have a glass of wine. I haven't decided yet.

But here's the biggest takeaway so far. I've been forced, through the sheer mechanical requirements of this cleanse, to live scrupulously in the moment. I have had to slow down and live at a different pace than the one I've become accustomed to. And I'm going with it. Today, the Whole Foods thing took over an hour, and I immersed myself in the shopping. Typically, I resent shopping, and try to fit in as many multi-tasks as possible: the post office, the bookstore, the gym. Checking my email while in line. Texting while ambling down the aisles. Today, when the checker asked his boilerplate, "Did you find everything you were looking for?" I said, "No, actually. There's this hair product made from quinoa that I couldn't find today," thus causing a b-and-f that must have enraged the shoppers in line behind me for the extra minute it added to the transaction. Something that, in my normal state as the next-in-queue, would totally piss me off.

But to neutralize the karmic impact, I held the elevator to the parking garage open for others, and allowed them to disembark before me, and I even returned my shopping cart after unloading it, instead of ramming it into a nearby wall as is my usual wont.

I'm rolling up my sleeves for week two, but I have to admit, I do miss happy hour. A lot.
Posted by Suzy Vitello at 6:25 PM