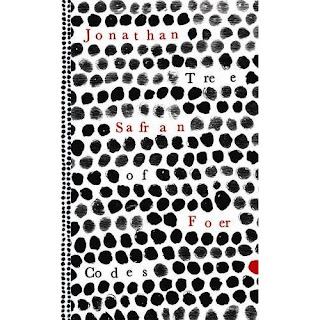 He's young, he's brilliant, he's rich and he's a writer.  No fair!  There's a certain jealousy writers feel when they ponder the life of a seemingly golden child of art.  Jonathan Safran Foer has all the makings of the iconic object of disdain.  A target for good old fashioned avarice--the sort that drives artists to wish bad things, disastrous calamities, even. That's all pretext to the latest Vanity Fair piece on Foer, who is in the process of launching his latest book, Tree of Codes.

The stir on this book isn't as much about content as form.  Foer sliced up (literally) a book by Bruno Schulz called Street of Crocodiles, and put it back together Humpty-Dumpty style, creating an homage and a new tale all at once.

Part of the buzz (positive and negative) no doubt has to do with this blurb by spacial artist, Olafur Eliasson:
[A]n extraordinary journey that activates the layers of time and space involved in the handling of a book and its heap of words. Jonathan Safran Foer deftly deploys sculptural means to craft a truly compelling story. In our world of screens, he welds narrative, materiality, and our reading experience into a book that remembers it actually has a body.

What!  Eliasson isn't an author! Such cross-pollination is confounding!

That Safran Foer.  What an upstart.

I remember first paging through Everything is Illuminated and feeling that I was viewing the inside of someone's brain. Clearly, his debut novel was fueled by his passion for discovery--that is, his interest in his Holocaust-escaping Jewish grandfather's plight--and it tumbles forth from there. He was 22 when he wrote that book.  22!  And now, several books later, he's flying in the face of the e-book, kindle dictate by creating a fiction that must be experienced sensually, in three dimensions.  The Schadenfoers are gleefully wringing their hands with this one: it won't sell!  It'll fail!  It's counter-intuitive!

My hunch, having heard and read interviews with the boy genius, is that his anachronistic urges, his need to constantly fuck with form, is not intentional.  Rather, it's a genuine by-product of his crazy-busy brain and the way he, as an artist, synthesizes the world.  In fact, I wish there were more Safran Foer types who were successful.  It might restore my faith in this largely pablum-sucking world.
Posted by Suzy Vitello at 8:12 PM