the writer on vacation 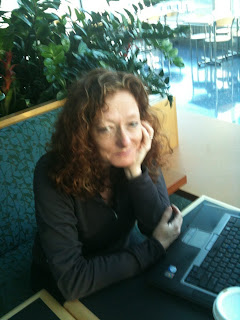 Many of the stories writers weave--okay, most of them--are mired in a melange of experiences, appropriations and fantasies. So it goes to follow that when a writer goes on vacation, senses are heightened at the same time that blockades to the imagination are freed up, and the result can be a volcanic eruption of story.

I'm at the tail end of my week in Hawaii. First trip anywhere this far West OR South, so a pretty big deal. Tropical Island vacations have never called to me the way they have my husband. The ocean is lovely, but I never pine for it. Swimming, I can take or leave. Hot, sticky air mostly disagrees with me. It's the oddness of leaving so much of my normative world behind that is the seduction here, to be honest. The suspension of disbelief, really. For instance, down the island apiece is the old sacred ground known as Place of Refuge, where for centuries citizens would brave shark-infested waters for possible redemption from the kapu they committed that would otherwise sentence them to death.

Pele, the passionate and capricious Goddess of Fire, shaped the island with her bouts of jealousy by spewing molten lava from Kilauea when betrayed.

King Kamehaha upended the Naha Rock in Hilo (all 7,000 pounds of it)to prove he was worthy Hawaii's greatest king. 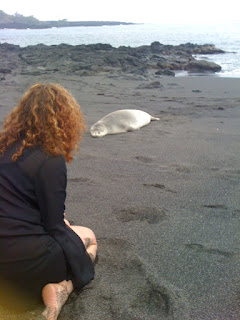 But nothing compares to the stories that live in nature here on this amazing young island, and never in my life have I been closer to the natural world than these past six days. Snorkeling with a pod of dolphins, swimming alongside a sea turtle, watching the slow, steady heartbeat of a resting monk seal, following a couple of Moorish Idols as they wave their sickle crest extensions in the surf and kiss the spongey tunicates off the reef rock--this is the raw material for weaving stories. 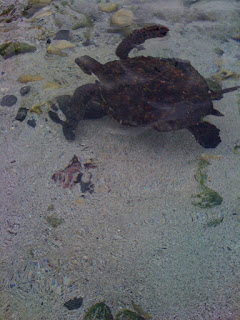 In regular-real life, it's often easy to forget the basics, and we generally avert any stimulus that takes our attention away from the list that spits us through our days. The best writing happens when we allow the visions, wonders and curiosities to flood us and drag us away from the quotidian tide.

I hope I can remember that when I'm back on the mainland.
Posted by Suzy Vitello at 8:25 PM